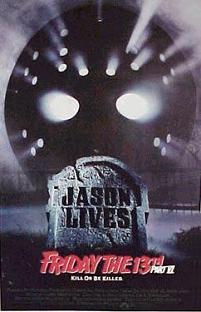 A fan-favorite installment of the Friday the 13th franchise and the last installment of the “Tommy Trilogy” (the three-movie arc focusing on Tommy Jarvis), Part VI gets the ball rolling on a whole new era of the series. Not only does Part VI revive the character of Jason Voorhees, but it also revitalizes him, breathing new life into the franchise that was nearly smothered in its sleep by the fiasco that was Part V: a New Beginning”.

Tommy Jarvis, still haunted by his memories of Jason Voorhees, travels to the killer’s grave to hopefully put his fears to rest. Exhuming Jason’s corpse, Tommy prepares to incinerate the body, but in a fit of blind rage, impales it with a long metal pole, instead. Well, a freak bolt of lightning just happens to strike said pole sticking out of Jason’s chest, reanimating the murderer as an unstoppable super-zombie. Thanks a lot, Tommy. So Jason’s back on his feet, more powerful than ever before and completely immune to conventional weaponry. And if that wasn’t bad enough, during Jason’s “nap”, Camp Crystal Lake was remodeled and reopened and is currently housing dozens of camping children. Not good.

Personally, I love the direction Part VI takes Jason’s character. He was always ugly and unstoppable in the past, but now he’s all those things to a whole new extreme. The whole “zombie”-thing may sound stupid, but the zombie-era of Jason actually has many of the best films in the franchise and the majority of the best kills. The only real downside about the zombie-era is that the Friday the 13th franchise eventually becomes a series relying solely on movie-to-movie gimmicks (having Jason fight a telekinetic, Jason visiting Manhattan, Jason going to Hell, Jason in Space, Jason fighting Freddy, etc).

Part VI adds a mix of humor to the atmosphere of the film, as if it’s self-aware of how ridiculous the story is. The humor isn’t tremendously blatant and shouldn’t throw you completely out of the experience, but it is entertaining. Tommy’s character is a lot more sociable in this film than in Part V, where he was a total nutcase. His final battle with Jason is one of the most memorable scenes in any Friday the 13th movie, even being parodied in shows such as the Simpsons. The kills are quite good, with people being broken in two, shish kabobed together, having broken bottles crammed down their throats, speared through the mouth and drowned in a puddle, faces crushed through walls and so much more. Jason was always brutal in the earlier films, but he’s a freakin’ *machine* in the zombie-era films.

Also, defying Friday the 13th conventions, there is no big unmasking scene at the end of the film. You see Jason’s face at the beginning (albeit briefly) when he’s still rotting in his coffin. This movie tries to imply that the hockey mask is his face, which is how I’ve always liked it.

Friday the 13th part VI is one of the most important films in the franchise, taking the series in a whole new direction. It’s also easily one of the series’ best installments. It gets a B for “brutality”.