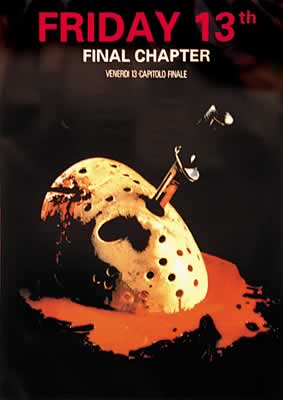 Don’t let the name fool you, Friday the 13th: the Final Chapter is *not* the final installment in the franchise (not even close); it’s actually just the 4th. However, story-wise, it would seem it was certainly intended to end the franchise. The Final Chapter might very well be the “quintessential” Friday the 13th movie at long last as it has numerous elements making it an instant horror classic and easily one of the best installments in the series.

Little Tommy Jarvis (Corey Feldman) and his family live out in the woods just off of Crystal Lake. Just next door, a group of rowdy teenagers rent a cabin to party and have pre-marital sex. Well, you can tell where this is going. Jason recovers from the axe he took in the face at the finale of Part III and returns to Crystal Lake to continue his most favorite of hobbies; slaughtering stupid punks.

Of all the Friday the 13th films, The Final Chapter actually has the most star-power going for it, featuring the likes of Corey Feldman and Crispin Glover. Well, I guess that counts as star-power. Some might argue that even if you combined the might of Feldman and Glover they still wouldn’t match the star-power of Kevin Bacon, who appeared in the first film. But I digress.

Feldman’s character of Tommy Jarvis would prove to be one of the only returning characters of the franchise, starring in his own three-movie “story arc”. Tommy Jarvis has remained a very popular character amongst the fandom and is the closest thing Jason ever had to a “nemesis”, kind of like Michael Myers and Loomis from Halloween or Freddy Krueger and Nancy from A Nightmare on Elm Street.

Tom Savini returns to provide the special effects for this film (he had previously worked on the first installment) and delivers some of his finest work. Jason’s unmasking and destruction during the film’s climax ranks as one of the most memorable scenes from any Friday the 13th movie, due in large part to Savini’s creepy and masterful gore effects.

This movie does have its drawbacks, though. Jason seems to hardly feature in the film at all until the ending. The bulk of the film centers around those stupid teenagers throwing parties and trying to get laid. I suppose the point of all this was to get the audience to “know” the victims and flesh them out into something approaching a 3-dimensional character. I hate to say it, but when I got into a movie knowing that these kids are all going to die, and all I *want* is to see them get hacked-up, I’m really not going to sympathize with them when they die. This heavy focus on the victims does get you to appreciate Tommy’s character, though. So some good came out of it. However, for the most part, it’s very very boring and you’re most likely going to fast-forward through these parts on repeat viewings.

The beginning of the film has a recap montage, one of two in the series (the other one being in Part VII). It’s a very good recap, using a combination of Paul’s narration from Part II with scenes of the best kills from each of the films. It sets a good tone for the beginning of the movie and gives Jason this “Boogeyman”-quality. While I do prefer Part VII’s montage over this one, I still think it’s a pretty cool way to begin the movie.

Friday the 13th: the Final Chapter isn’t perfect by any means, but it’s probably the closest thing the Friday the 13th series has to an “essential” film that encapsulates everything that makes the franchise special. I give it a B-. Definitely one of the best films in the series.