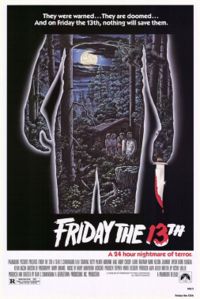 The major problem I have with the original Friday the 13th is that it’s hard to consider it the “quintessential” installment in the franchise. It got the ball rolling, certainly, but it lacks the one element Joe Average recognizes the Friday the 13th franchise for: Jason. And that, basically, is the major fault of the entire Friday the 13th franchise (though I love it so); there really isn’t a “quintessential” installment. Halloween, a Nightmare on Elm Street, Hellraiser, the Texas Chainsaw Massacre…the first films in those franchises are considered the best by most and have all the elements instantly recognizable of the series. Jason, at least the hockey mask-clad version we remember best, didn’t show up on screens until the third film in the franchise (he wore a burlap sack in Part 2), and by then he wasn’t stalking camp counselors anymore, just stupid teenagers in vacation houses.

Plot: Steve Christy is reopening Camp Crystal Lake with the help of his summer camp counselors. However, Camp Crystal Lake has had an ugly past, filled with murder and destruction. No sooner do the counselors get to work, a mysterious person lurking in the woods begins killing them off one-by-one.

Probably the shortest plot summary I’ve ever written, not that I’m complaining. Friday the 13th gets straight to the point, killing off stupid teenagers and Kevin Bacon in creative fashions. The acting from most of the cast is nothing to write home about, but a decent selection of actors for such a low-budget film from 1980.

No, what Friday the 13th really has going for it is the violence and the special effects. Tom Savini, master of gore, heads up the special effects, providing numerous memorable kills. While some may seem rather cut and dry by today’s standards, the things they did to those teenagers were unheard of back in 1980. Savini’s special effects withstand the test of time and I’d say they’re an improvement over his work in Dawn of the Dead. Sean S. Cunningham delivers an eerie atmosphere, though he’d later prove to lose his understanding of the series with Jason Goes to Hell. But his direction, when coupled with Harry Manfredini’s manic score, results in a very hectic pace. It’s particularly heart-pounding toward the end, when there’s only one counselor left standing. You get a very genuine, “Oh s***” feeling.

Friday the 13th is a good horror movie by all standards, it just lacks the pro wrestler in a hockey mask. So if you’re looking for Jason, and that’s all you really care about, just skip ahead to part 4 where he fights Corey Feldman and Crispin Glover. The original Friday the 13th, though, deserves a B.