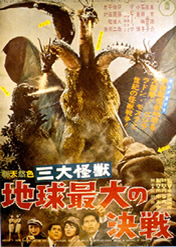 I was absolutely impressed with this film. I didn’t think they could out-do themselves after Godzilla vs. Mothra, but less than a year later they come out with this masterpiece.

First, let me get the human plot out of the way. To be honest, it may very well be the BEST human drama to ever appear in a Godzilla film (outside the Raymond Burr plot in the Americanized original). It was refreshingly creative. Too often the films rely on mad scientists, reporters and government agencies to drive the human plot, but this was something completely new. A Princess from a fictional country goes crazy and believes she is a prophet from the planet Venus (and may very well be), so she travels around warning people of the coming of monsters and Ghidorah’s imminent destruction of Earth. All the while assassins are after her because the king of her country (her father, no less) wants her dead. And while THIS is going on a police officer dedicates himself to tracking her down and protecting her from her pursuers while his sister, a news reporter, follows in order to get an exclusive on her prophecies. This carried the movie wonderfully. It never got boring or outrageously stupid, and makes this one of the best Godzilla movies for repeated viewings.

Now for the kaiju segments. There are a lot of fan favorites in this movie. Godzilla, Rodan, Mothra and the new-comer, King Ghidorah. It’s easily the best Showa era kaiju team-up outside Destroy All Monsters.

Godzilla’s suit went through a little change, no more big brown eyebrows. Also, his atomic breath has thankfully been changed from a smoke-machine to exclusively animation. There’s a funny scene where Ghidorah zaps Godzilla in the ass and he starts to rub his behind in pain. Hey, compared to the Irish Jig in the next film, this was comedy gold.

Rodan looked fine to me. Some people complain about the length of his neck, but it didn’t really bother me. I thought it was an improvement on his suit in the previous Rodan movie. My only issue was the size of his head, but that’s been a problem with all the Rodan costumes I’ve seen (save for the Heisei and Millenium incarnations); it’s way too small. Rodan proved to be a decent fighting partner for Godzilla, though they got off to a rough start. I still prefer to think of Anguirus as Godzilla’s “#1 Guy”, though.

Mothra was a Larva again. Just one this time, as her sister apparently died between this and the last movie. Mothra is again the goody-two-shoes savior of Earth that the tiny Princesses call upon whenever the world is in monster peril. The effects shots with them were done just as flawlessly as in the last movie. In fact, it was interesting to see them kind of working on relations between Infant Island and Japan, appearing on talk shows and being regarded as celebrities rather than sideshow freaks to be captured and exploited.

King Ghidorah is inarguably the star of the show. A nice origin set up for him. I liked the whole Space Demon-thing, a nice change-up from the tired “Dinosaur gets frozen in ice and mutated” device used with Godzilla, Anguirus and Rodan (Rodan wasn’t frozen in ICE but it was the same concept). His first appearance is magnificent. The combination of animation and explosions set him up perfectly. In fact, it was SO cool they recycled it a couple times in future installments. I have to say, visually, Ghidorah is the most impressive of all the kaiju. The wire-work involved in making his heads, tails and wings all function separately at the same time must’ve been quite an undertaking. But the end result is spectacular. As far as the Showa series goes, King Ghidorah is the most worthy of being called “Godzilla’s Arch-Nemesis”. Not just because he’s fought him the most times, but because it always takes a team-up for Godzilla to beat him. Ghidorah is stronger and has all sorts of advantages over him. Personally, Ghidroah’s my second favorite kaiju (Anguirus being numero uno).

Then there’s the fight scene. It starts out with the three heroic kaiju having a “conference”, complete with dialogue translation by the Princesses (apparently all kaiju speak the same language). Mothra gets on top of a hill and acts as the “Chairman” whilst Godzilla and Rodan bicker below about the pros and cons of helping the humans. It’s absolutely hilarious, and though campy and silly, it’s done in a tongue-in-cheek manner, not to be taken too seriously. I loved it.

In the end they all teamed-up to take down Ghidorah. I liked Rodan’s hurricane attack, much more effective than I remember it being. He also got the best blow against Ghidorah. During their aerial chase scene Rodan turns completely around at a moment’s notice and just SLAMS into Ghidorah. Next thing you see is Rodan laying on the ground next to the quickly recovering Ghidorah and you could tell he was thinking “Crap, I shouldn’t have done that”. The final part of the battle where they all work together to defeat Ghidorah is the finest example of a kaiju team-up. Mothra gets on Rodan’s back and flies to a vantage point to shoot stun webbing at Ghidorah while Godzilla holds him in place from behind.

I also have to congratulate this movie for maintaining perfect continuity. Rodan digs himself out of the volcano he got trapped inside of in his last movie, Godzilla’s under water (big surprise), Mothra’s back at Infant Island but in larva form as seen at the end of Godzilla vs. Mothra and her sister has apparently died, hence there’s only one of her.

On a personal note, this ranks in my Top 5 Godzilla Movies, and gets a B+ from me. One of the best films in the franchise.