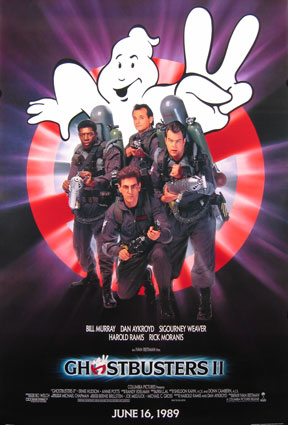 Ghostbusters II tends to be the source of much criticism from fans. Some say they didn’t like it because of the pacing, some say it was the story, others say the villain, yet the most common explanation I hear as to why so many dislike the film is “Because it wasn’t as good as the original”. I have to say, that answer always strikes me as being a bit unfair. The original Ghostbusters is one of the finest comedies ever made, many can agree on that, and trying to trump it with a sequel just wasn’t going to happen.

5 years after the battle with Gozer, the Ghostbusters have been forced out of business thanks to a series of class-action lawsuits. Making ends meet in their own individual fashions, the Ghostbusters are brought back together when their former client, Dana Barrett (Sigourney Weaver), asks them to investigate a strange happening involving her infant son, Oscar. Peter (Bill Murray), immediately dedicates himself to solving Dana’s problem in a bid to win back her affection, as Ray (Dan Aykroyd), Egon (Harold Ramis) and Winston (Ernie Hudson) get back in the paranormal investigation-game. It would appear that Vigo the Carpathian, a warlock and tyrant from ancient times, is trapped within a portrait in the Metropolitan Museum of Art (also Dana’s workplace) and intends to resurrect himself through Oscar. The Ghostbusters gear-up for a big comeback, as legions of evil spirits once again invade New York City.

I won’t argue that Ghostbusters II is inferior to the original, but I won’t overreact like so many others and label it a “bad movie”. Ghostbusters II is still funny, well-acted, has great special effects and lots of awesome monsters. The full cast reunion is a wonderful thing, as everyone, even Louis (Rick Moranis) and Janine (Annie Potts) are brought back for another round. None of the actors have lost any of their comedic talent and still play off one another as brilliantly as they did in the original. The humor in this film is fantastic, and really, is the least of the film’s problems. Most people don’t knock Ghostbusters II for the humor since it really is very funny.

As a villain, Vigo is a bit lackluster and at times can feel like a retread of Gozer the Traveler. The final battle with Vigo is also a remarkable let-down. But, while Vigo may not have been the best ghost in the movie, there are plenty of others to keep you from getting bored. The special effects this time around were provided by ILM, the Star Wars-people, which means absolutely brilliant quality. The Scalari Bros are a great example of the special effects used on the ghosts to make them look more convincing than the ones from the first film. Slimer, who returns for this film, also looks fantastic, though he’s gained quite a bit of weight between the two films. The kid in me just can’t get enough Slimer. Like the first film, the ghosts and horror effects can range from “goofy” (but in a good way) to down-right dark and gothic. I found the scene in the subway tunnel with all the severed heads mounted on spikes to be particularly nasty for a movie so often advertised as a “family film”. And, in regards to Vigo, while he may not have been such a great badguy, he at least looked cool thanks to some great special effects which gave him this weird, bluring “after image” effect.

One of my personal major complaints with the film is the almost criminal under-use of Winston. On many occasions, the script seems to go out of its way to exclude him from scenes. While he was a well-developed characted in the animated series, in the films, he’s a bit of a third wheel. You never find out what he did to make ends meet in the 5 year interim (save for doing birthday gigs with Ray on the side) and he’s not only completely missing from the street-digging sequence, but pointlessly removed from the courtroom scene with the Scalari Bros. Winston even shows up in the courtroom, talks to the Ghostbusters on trial and can be seen sitting in the background. However, once the Scalari Bros attack, Winston disappears. It always bothered me that they went out of their way not to use him.

I suppose what Ghostbusters II needs, which would really enhance the film and finally satisfy nay-sayers, is a “Director’s Cut”. There were many scenes that were finished, special effects and all, which wound-up on the cutting room floor for reasons of time. As a result, characters and plot-twists can take a nosedive into the realm of “WTF?” For instance, all of Louis’ extra scenes in the Firehouse, where he interacts with Slimer and Janine, were cut. These scenes set up his desire to become a Ghostbuster, his budding romance with Janine and his rivalry with Slimer. With these scenes absent, Louis’ ambition to become a Ghostbuster at the end of the film seems purely out of the blue, as does Janine’s sudden desire to sleep with him (makes her look like a total slut). Also, the bit where Louis is so surprised that Slimer is willing to help him get to the Museum at the end loses a lot of comedic value, as Louis was *supposed* to spend the bulk of the movie trying to catch Slimer. Another missing scene takes place after the Ghostbusters first investigate the museum and Ray becomes hypnotized. While driving away, Ray attempts to crash the Ecto-1A and kill all the Ghostbusters. He eventually snaps out of it, but Vigo maintains his hold on Ray throughout the film. With this scene deleted, Ray’s possession by Vigo at the film’s climax seems especially random and, well, stupid. If these scenes could be edited back into the film it would flow much more smoothly.

Ghostbsuters II is, I admit, an inferior sequel. Yet, sequels can be inferior to the originals yet still be *good*…just not as good. That’s how I feel about Ghostbusters II. I enjoy the film, I love seeing all the actors reprise their classic characters, and I totally dig the special effects. Ghostbusters II is worth a B, if you ask me.