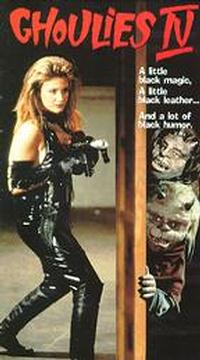 I spent the best years of my life avoiding “Ghoulies IV”. Based solely on appearance, I had always figured it to be a “sequel in name only” much along the lines of “Troll 2”. You know, a movie that was made without intention of being part of a franchise only to have that series’ name slapped on it at the last minute in a futile attempt to boost sales? Much to my astonishment, “Ghoulies IV” actually has more continuity with the Ghoulies series than the last two sequels. And yet, simultaneously, it hardly feels like it should be called a Ghoulies movie at all. A strange animal, this “Ghoulies IV”.

Leather-clad killing machine Alexandra (Stacie Randall) has designs to release a dark spirit known as Faust from the pits of Hell. During her first attempt, she unintentionally releases a pair of wise-cracking Ghoulies (Tony Cox, Arturo Gil), instead. In order to do it right, Alexandra needs a magical jewel worn by a grizzled LA detective named Jonathan Graves (Peter Liapis) who has had plenty of experience with Ghoulies in the past. Jonathan wants to bring Alexandra to justice, Alexandra wants Jonathan dead, Jonathan’s superior and ex-girlfriend (Barbara Alyn Woods) wants them to get back together, Faust wants out of Hell and all the two Ghoulies stuck in the middle want is to go home.

Those of you more familiar with the previous installments in the Ghoulie franchise (all seven of you) will immediately recognize Peter Liapis reprising his role as Jonathan Graves from the first film; the sorcerer who originally brought the Ghoulies to Earth. Hooray for continuity!

Those of you more familiar with the previous installments in the Ghoulies franchise will also immediately notice that not a single recognizable Ghoulie is to be found in this sequel, save for during clips from the first film. The reason for this is because the classic puppet Ghoulies were too expensive to work with so they opted for a pair of midgets in costumes, instead. Boo for low production values!

That’s right, the movie is titled “Ghoulies IV” yet it doesn’t have a single Ghoulie from any of the other films in it. That right there is what lead me to believe this was a “sequel in name only” for so many years. The two Ghoulies featured in this installment are also noticeably different from the Ghoulies we’ve come to love, and I’m not talking about their being midgets in costumes, either. These Ghoulies talk and are, in fact, good guys. They manage to help save the day during the climax, even. The film’s actual villain is the psychotic dominatrix, Alexandra, which I guess isn’t so bad considering how easy on the eyes she is. The actual Ghoulies, though, only factor into the film very lightly and aren’t even all that essential to the plot. Watching two new Ghoulies in a supporting role as good guys in a film that should be about Ghoulies is mainly what drives most fans of the Ghoulies franchise away from this installment. And considering the Ghoulies fanbase can likely be counted on one hand, that’s not a very wise marketing tactic.

Like the films that came before it, “Ghoulies IV” is a dark comedy at its core. Is it laugh-out-loud funny? Not…really, but there are definitely a few solid nuggets of comedy thrown in there. The best one features a used condom, disgustingly enough.