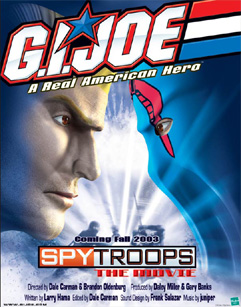 The first installment in a brand new G.I. Joe animated continuity, “Spy Troops” would see a sequel film, “Valor vs. Venom” and a television series, “Sigma Six”. For a 45 minute-long movie made to sell toys, Spy Troops is actually pretty good. The CG animation takes a little getting used to, but the writing is very witty and the action maintains a cinematic feel. With a greater length and a bigger budget it might have made a decent feature film.

The CG animation used for the film ranges somewhere in between “theatrical” and “television”. It’s nowhere near the quality of a movie you’d see in theaters, but at the same time, its leagues ahead of CG animated television shows. The quality is overall very good with the 3D animation giving the action sequences a very theatrical flare to them; it almost feels like a Hollywood movie. At the same time, the “realism” of the CG animation is hindered by some cartoonish by-passing of the laws of physics. Characters punch helicopters with their fists, destroying them, bounce off walls like ping pong balls or obliterate gigantic 10 ton boulders with a Magnum. In a traditionally animated cartoon these sorts of things are forgivable, but when you’re going for “realism” with CG animation, this kind of stuff sticks out like a sore thumb.

The voice-acting is performed by Canada’s immensely talented Ocean Group, who are no strangers to the world of G.I. Joe. As a matter of fact, they did the DiC series of G.I. Joe (seasons 3-4, the ones after G.I. Joe the Movie) as well as G.I. Joe Extreme. Surprisingly, though, not a single member of the Ocean Group voices a character they played during the DiC series. That might actually be a good thing, as honestly, the voices in the DiC G.I. Joe cartoon sucked. The actors this time around are given characters that more strongly suit their talents. Scott McNeil plays a fantastic Destro, Blu Mankuma’s Heavy Duty has an aura of “cool” and Michael Dobson does an exceptional Cobra Commander. Now, my one regret is that Scott McNeil didn’t reprise the role of Cobra Commander, as he voiced the character in the final season of the DiC series, after the original actor, Chris Latta, left. While I enjoyed Dobson’s approach to the character (Dobson also voiced Starscream, Latta’s other famous role, in the Transformers Armada, Energon and Cybertron cartoons), I’ve always preferred McNeil’s impression.

The voices aren’t perfect, though. Beach Head is completely miscast and it almost hurts. They chose to give him a “radical” surfer dialect when he’s supposed to be the ball-busting, no nonsense drill sergeant of the team. Thankfully, this was corrected in Valor vs. Venom. There’s also Dr. Mindbender, who loses half his charm without his stereotypical East German mad scientist accent. Zartan is okay, but really would have been better had he been given the voice over effects that the actor from the original Sunbow cartoon received. Other characters, like Dusty and Flint, are completely forgettable and devoid of any personality.

This is also quite possibly the best animated incarnation of Snake Eyes and Storm Shadow. No doubt we should thank Larry Hama, author of every issue of the Marvel G.I. Joe comic, who wrote the script for this film. Hama’s take on the characters are iconic and really shine through. A few poor casting decisions (Beach Head) betray his script, but for the most part, it still comes off as a Hama story.

G.I. Joe Spy Troops isn’t perfect, but I liked it more than Valor vs. Venom. The DVD also comes with a plethora of extras, including a making-of featurette, a music video and a complete collection of those awesome CG commercials when the new line of G.I. Joe toys first hit the market.