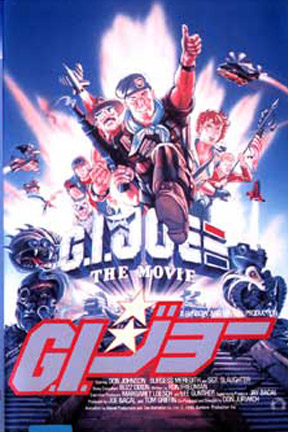 There’s not much to say about G.I. Joe: The Movie other than that it’s a terrible way to remember your childhood. The Transformers: The Movie is a real treat for those who saw it when it first came out (and were traumatized for life) and those who may have missed it: it’s a step up in storytelling and animation and actually is a fulcrum for the continuity of the franchise (for those keeping track). Oh, and there’s robots dying and a hair-metal soundtrack. Badass. G.I. Joe: The Movie does none of these things and seems like a prolonged series episode. It offers a number of plot revelations that are supposed to be crucial to the overall continuity but are laid out so thinly that no one, not even the kids, will really care. And Duke almost kicking the bucket has nowhere near the emotional impact as Optimus Prime turning black and buying the farm.

For those not familiar with the story of G.I. Joe, here is the best summary that I can plagiarize: “G.I. Joe is the code name for America’s daring, highly trained special mission force. Its purpose: to defend freedom and justice against COBRA, an evil organization determined to rule the world.” The leader of COBRA is a hissy guy with a helmet named Cobra Commander, whose face you never see. On the Joe side, their leader is General Hawk although it’s usually Duke who leads. There is no real backstory and the delight of the series was simply seeing each unique character do what he or she does best while Cobra Commander screamed a lot and retreated. The movie attemps to shed some light as to where these Al-Queda wannabes came from: apparently, an ancient civilization called Cobra-La (I’m not making this up) led by Golobulus (Burgess Meredith) was the predecessor to modern man and was usurped and forced to hide following the ice age. Having bided their time, the denizens of Cobra-La sent an emissary of theirs named Cobra Commander into the human world to overthrow humanity and reclaim the Earth for Cobra-La. But because Cobra Commander needed to be replaced to sell better toys, the movie makers decide to show Cobra Commander’s nasty face, turn him into a stupid snake, and have Golobulus and the COBRA command circle fight the Joes for command of the B.E.T. (Broadcast Energy Transmitter, not Black Entertainment Television) so that they can release mutative spores into our atmosphere.

Had the movie been done in live action, it would amount to B-movie material and not the explosive military action that G.I. Joe was meant to be. Think “Slither” instead of “Saving Private Ryan”. The film jumps from locale to locale as the Joes fight hideous snake creatures and the ranting of Serpentor. Duke “dies” at one point but snaps out of it near the end because kids everywhere were scarred for life after the death of Optimus Prime. Other than that, nothing happens that wasn’t immediately fixed or ignored in the series followup. The only thing I can give the move props for is the “holy shit!” opening title sequence that takes place on the Statue of Liberty. I don’t want to spoil it for you, but it basically amounts to “G.I. Joe: The Musical” done with flashy Broadway lights and with explosions and violence instead of gay male dancers. A real treat if you can see it on YouTube without actually renting it.

The plot? Well, G.I. Joe is a daring, highly trained special mission force. Their purpose: to defend human freedom against Cobra, a ruthless terrorist organization determined to rule the world. For the first 5 minutes of the movie, anyway. After that, we learn about an ancient society of reptile people called Cobra-La. As it turns out, they’ve been manipulating Cobra since day one, and now they want to mutate all of humanity into grotesque monsters by launching spores into space. But to make the spores work, they need the Broadcast Energy Transmitter. And that happens to be in the custody of G.I. Joe. Lucky for them, G.I. Joe is having open auditions for a bunch of new toys/people, and these guys are utter screw-ups. Especially Duke’s baby step brother, Don Johnson. Well, Cobra gets the B.E.T., the majority of the Joe team gets captured and the only ones who can save the day are an over-the-hill pro wrestler, a blind gangsta-rapper, Don Johnson and a screeching boa constrictor that was once a man.

I’ll give the movie points for having a plot that’s absolutely insane. However, the whole thing falls way too deeply into the Sci-Fi category for it to really feel like G.I. Joe. Add to that the onslaught of new characters and most long-time fans will feel pretty ostracized. It also doesn’t help that this movie’s most important scene/plot device was edited at the very last minute. The death of Duke could have been just as moving as the death of Optimus Prime, but instead they slap in a few lines about him going into a coma and pulling through 45 minutes later. Because getting impaled through the heart with a poisonous snake just isn’t that life-threatening.

The bright side? The opening fight scene on the Statue of Liberty is the greatest piece of G.I. Joe animation ever produced. Every Joe and every Cobra is there, doing battle, and the whole thing is just brutal (no parachutes!). They fight to a cover of the G.I. Joe theme song, and it rocks. If only the last 85 minutes had been more like the first 5 minutes, this would have been the greatest movie ever.

The animation from Japan’s Toei Studios is also very impressive, especially in that opening fight scene. They had animated the previous 2 seasons of the TV series, so they had a great handle on the characters and choreography. There also aren’t nearly as many animation and logic errors as in Transformers the Movie. The fight scenes are particularly entertaining, especially Quick-Kick getting owned by Nemesis Enforcer. Also, Cobra Commander’s helmet is shinier than ever. No one does reflective surfaces quite like Toei.

Does the Movie have any lasting effects on the G.I. Joe TV series? No, not really. The season following the movie (produced by DiC with animation by Kunitoshi Okajima, instead of Sunbow with animation by Toei) basically returns everything back to normal in the first five episodes, “Operation: Dragonfire”, and it’s like the whole thing never happened.

The nostalgic kid in me loves this movie to death. However, the critic and G.I. Joe fan in me can’t help but notice all the things wrong with this film. I’m afraid I have to give it a C. Sorry, Duke. You were better off dead.