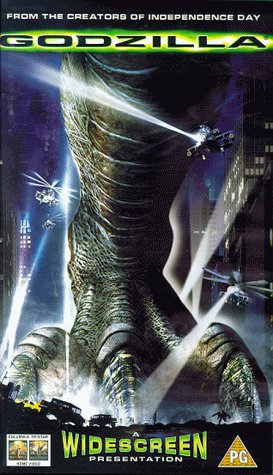 Firstly, the last time I watched this film was back on Memorial Day, 1998. I saw it opening night, expecting so much. I waited this long to watch it again because of how angry I was when I left the theater. I remember New Year’s Eve, 1997, I was watching all the commercials, waiting for midnight, when they played the first teaser. A bunch of people standing in Time’s Square, watching the ball drop, then a giant reptilian tail whips out from behind a building and knocks the ball into the crowd. Then they showed the title “Godzilla” with the trademark roar. I nearly wet my pants. Then I saw the movie. Wow, did that make me mad.

Now that I got THAT off my chest, I will review the movie.

I don’t like to think of it as an actual Godzilla movie, but rather a giant kaiju flick which takes place within the Godzilla universe (like Mothra, Atragon, Frankenstein Conquers the Earth, King Kong Escapes, etc.). That’s the best mindset to be in while watching the movie, and honestly, is how Toho has been regarding the movie within their continuity with the last few entries in the Millenium series. And that being said, it was the mindset I was in when I watched it last night. So to be honest, it wasn’t THAT bad.

If you put aside the fact that it isn’t Godzilla in a film titled “Godzilla” (but actually a character Toho has officially named “Zilla”) the movie is more viewable. In fact, Zilla is quite the cool looking kaiju. For a mutant iguana, he is very well designed and the special effects used to create him still hold up to today’s standards (with the exception of a couple weak bluescreen effects, but the Japanese Godzilla flicks are prone to that too). The first chase scene through New York City with the four apache helicopters was actually really damn cool. The chase scene with the invulnerable taxi cab…not so much.

I have to say, I liked the New York setting quite a bit. Manhattan is a VERY different city in design to Tokyo and thus puts a kaiju in a completely unique setting.

But put that aside the movie does have plenty of flaws. Namely the human drama is at its worst. The characters are wooden, cardboard cut-outs of other wooden cardboard cut-outs. The other problem is that the movie is waaaay too long. I noticed the average Godzilla flick is between 85 and 100 minutes, this was over 2 hours. Two thirds of which was human drama worse than that seen in Terror of Mechagodzilla. Plus the writer’s idea of “humor” is about the same caliber you’d find on a Bazooka Joe wrapper.

If you look at this movie as “just another kaiju flick” then it isn’t the monster that brings it down, it’s the human drama. And that can hurt any Godzilla movie.

I’ve already gotten way ahead of myself, but for those of you not aware, the plot goes like this: French nuclear weapons testing (wtf?) mutated an iguana into a giant, a-sexual behemoth. A bunch of Japanese fishermen mistake it for “Gojira” and the American (and French) government takes notice. They hire Matthew Broderick, an expert on mutated…stuff, to investigate some evidence of the giant iguana. Meanwhile, Sara Jessica Parker, his one-time girlfriend, tries to hook back up with him to get the scoop on the creature. Shortly after all that, though, Zilla makes himself known by rising from the ocean, in a blatant homage to Ray Harryhausen’s The Beast from 20,000 Fathoms, and attacks Manhattan indiscriminately. Now, Matthew Broderick and Sara Jessica Parker must team-up with Hank Azaria to stop this enormous, building-humping menace before it has babies all over the place.

Speaking of which, a lot of people criticize the baby Zillas inside Madison Square Garden, but it’s nothing we haven’t seen in a Godzilla flick before. Godzilla vs. Destroyah had a bunch of 9-foot Destroyahs chasing around the main cast, and Godzilla X Megaguirus had all those Meganulons. Regardless, it did imitate the velociraptors from Jurassic Park a little too much for comfort.

As far as Zilla is concerned, he looks great, but as a kaiju he is very very weak. He’s about half the size of the real Godzilla if you look at his size when compared to skyscrapers and Godzilla’s size compared to skyscrapers. Zilla also can’t take military hits very well. 8 sidewinder missiles do him in. Godzilla’s impervious to standard military weaponry. Add to that the only special attack he has is his Heatwave Breath (which isn’t all that special) and you’ve got a kaiju that looks great but lacks everywhere else.

I’m afraid that no matter how cool Zilla looked and how good the FX were, I just can’t bring myself to give this movie a good score. It’s not the disappointment that makes me hate the movie (since I view it as “just another Kaiju movie”), it’s the mind-numbingly bad human drama that makes up the bulk of the film, the awful attempts at humor, and the obnoxious cast.

If you honestly, truly hate Zilla, though, then I highly recommend you sit down and watch Final Wars, the last installment in the Millenium series. You’ll be treated to a brief, but satisfying showdown between Zilla and the genuine article.

And if you’re interested in seeing how this film relates to other films in the Godzilla continuity, then check out the outstanding Giant Monsters All-Out Attack for a light-hearted reference to the movie.

As far as a grade is concerned, I give it a D. It might’ve gotten a C because it was a decent enough giant monster movie, but I can’t help but lower the grade for the blatant, BLATANT false-advertisement. Thanks for nothing, Matthew Broderick.