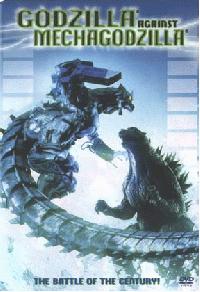 Just as a note, I watched this film in widescreen with the original Japanese dialogue.

A new Godzilla is terrorizing Japan and nobody knows what to do. Wait, yes they do; build a giant robot doppelganger! But this time they build their Mechagodzilla from the bones of the original Godzilla, killed by the Oxygen Destroyer in Godzilla, King of the Monsters. Godzilla and Mechagodzilla throw down a couple times until somebody wins. Yes, that is the extent of the plot.

I would have to say that this is my least favorite installment of the Millenium series. It had a good concept, and Kiryu is definitely the coolest looking Mechgodzilla to date, but the movie had some serious flaws.

For one thing, the humans were just so unlikable it was hard to sit through their scenes (which were many). The female lead (who’s name escapes me…in fact, ALL the human’s names escape me because I didn’t care about them in any way whatsoever) was supposed to appear hardened and soulless but instead came off appearing like she had no acting talent and they just cast her off the street. The silly old scientist and his constant advances toward the female lead were just embarrassing. As I’ve said before, the whole “Government hires a scientist to create a weapon to destroy Godzilla” plot has been done to DEATH. And then there’s the little girl. Annoying.

But it wasn’t just the human drama that hurt this movie. The guy who played Godzilla in this film truly sucked. It’s like he was sleeping inside the suit or something. Mechagodzilla’s going all-out and missile-bombing the crap out of Godzilla…and he’s just standing there, motionless like a statue. Makes me wonder if someone was even in there. The fight scenes are just so unsatisfying thanks to the poor acting on Godzilla’s part (never thought I’d type THAT sentence).

However, the movie wasn’t ALL bad. As I said before, Kiryu looked impressive, and regardless of what others think, *I* liked the Jetpack. For once Mechagodzilla’s flying didn’t look silly. I also appreciated the origin of this Mechagodzilla, as it’s far more interesting than what they’ve written in previous films featuring the character. Add to that the use of footage from previous Toho kaiju flicks (Mothra and War of the Gargantuas) was pretty cool. Oddly, though, the DVD has the Toho Mothra icon included on the back (Godzilla DVDs recently have been including these icons to indicate which of Toho’s kaiju appear in the film) but no icon for Sanda and Gaira. They appear for just as long and in exactly the same fashion as Mothra, why don’t they get icons? They gave an icon to Gabara, for Heaven’s sake! Where’s the love for the Gargantuas? Actually, it doesn’t really bug me at all.

Another thing that ACTUALLY bugged me, though, was the dropping of a plotline that all reasoning would indicate to be an important piece of the film: Kiryu goes berserk and starts rampaging Tokyo after hearing Godzilla’s roar. After all, it was made from the bones of the original Godzilla and thus has its memories. After its batteries run out they do a little reprogramming and this is no longer an issue. Seemed more like filler to me. They’re pulling a Matrix Revolutions!

To be fair, they address this plotline more deeply in the sequel, Tokyo SOS, but after seeing this film I can’t say I’d blame anyone if they weren’t motivated to sit through the second installment.

All in all, it wasn’t a good movie. The human drama was bad and so were the kaiju battles (though some of Kiryu’s CGed moves looked okay). Add to that a very anticlimactic ending and this movie just fails to please.

It gets a D+, and that’s probably being generous.