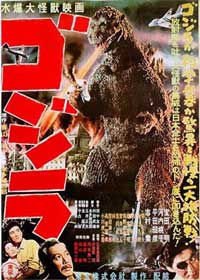 When most people hear the name “Godzilla” they instantly think of the cheesy films like “Godzilla vs. Megalon” or “Godzilla vs. Gigan”, blissfully unaware that, at one point in time, Godzilla meant a whole lot more than some goofy mascot used to sell action figures. The original Godzilla produced in 1954 isn’t some schlocky B-movie. Quite the contrary, it’s a dark and frightening look at the horrible consequences of nuclear weapons and a magnificent commentary on the fears of Japanese citizens post-World War II.

The fishing boat Eiko-Maru mysteriously vanishes out in the Pacific in a blinding flash of light bursting from beneath the waves. Shortly afterward, the people of Odo Island fall victim to a bizarre rampage that destroys half their village, leading them to believe that a legendary beast known as “Godzilla” has come to destroy them. While investigating the strange footprints left on the island, Professor Yamane, his daughter, Emiko, and her lover, Ogata, come face-to-face with the titanic beast-itself. Godzilla soon appears in Tokyo Bay, destroying homes and murdering scores of people. The Japanese government races to find a means to destroy Godzilla before his next attack, but all standard military weaponry is absolutely useless against the monster. Emiko’s fiancé, Dr. Serizawa, has created a weapon that might be capable of killing Godzilla, but the weapon is so incredibly destructive it could be worse than any nuclear bomb.

By 1954, the effects of Japan’s defeat in World War II were still being felt all over the country and few had gotten over the atomic destruction of Hiroshima and Nagasaki. Additionally, the Japanese fishing ship, the Lucky Dragon, had been accidentally caught in a US atomic bomb test, killing all onboard. Atomic weaponry was a concept the Japanese feared tremendously at the time. Godzilla wasn’t just a giant monster, he was atomic destruction personified, given a corporeal form and a face. His behavior is unpredictable, uncompromising and unstoppable. People look at the original Godzilla and see another giant monster B-movie along the lines of “Earth vs. the Giant Spider”, but they do themselves a great disservice by ignoring the extensive social commentary and historical significance of the film.

Godzilla-himself is nothing like the Irish-jig dancing, child-rearing, kid-friendly character you’ll see through-out the 60’s and 70’s. He’s a brutal killing machine; an absolute force of nature. He levels homes and businesses, murders thousands, sets cities on fire, kills women and children indiscriminately; Godzilla is pure evil. His eyes glow in the darkness, completely devoid of emotion or sympathy; at times he seems to actually target the people scurrying beneath his feet. The aftermath of his devastation of Tokyo is shown with full force. Bodies lined up and down hospital hallways, numerous orphaned children weeping for their parents; this isn’t Power Rangers or Gamera, Godzilla’s attack is looked at like a real disaster situation with all the tragic repercussions that follow. Director Ishiro Honda never spares the audience the gruesome outcome of Godzilla’s rampages and does a startling job of making the entire scenario disturbingly realistic.

The human characters in this movie are all very interesting and carry the story along with ease. Dr. Yamane is hesitant about killing Godzilla because he’s the last of his kind. Emiko, Serizawa and Ogata have a love triangle going which adds depth to their situation. Serizawa is a very stand-out character and possibly the most memorable human of any Godzilla movie. His tragic sacrifice at the end is truly heart-breaking.

Eiji Tsubaraya’s special effects are phenomenal considering the time they were made, the budget they were made with and the short period of time they were provided to produce them. In fact, they’re nothing short of miraculous. Godzilla’s suit is extremely detailed and frightening, mixing aspects of both dinosaurs and mythical dragons. The miniatures are by far one of the most impressive accomplishments of the film, with dozens of buildings crumbling beneath Godzilla’s feet and actually looking like they have a weight of tons rather than ounces. There are a few instances of dodgy effects, such as the Godzilla hand-puppet used through-out the film or the wires on the fighter planes being clearly visible. Yet these noticeable errors are easily forgivable considering the overall impressive special effects work of the film.

The opening of Godzilla is something I also think is note-worthy in that it immediately expresses the dread the title character embodies using an incredibly minimalist approach. You are presented with a black screen accompanied by loud, crashing stomps which is soon followed by a bizarre, unearthly roar. It then leads into the title and opening credits which make way for the movie’s theme. The late Akira Ifukube’s score is truly epic and one of the most memorable movie themes out there. The opening of the film, which consists of nothing more than title cards, sounds and music, sets the entire atmosphere of the movie in a matter of minutes. A very impressive display.

While I will always enjoy the American version of this film, “Godzilla, King of the Monsters”, I must admit that the original Japanese version of the film is truly superior. Godzilla is a magnificently dark and moody film that has a whole lot to say.