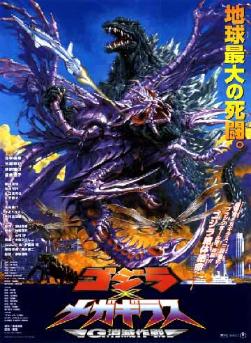 Now, I really don’t understand the distaste for this movie within the fandom. The webmaster over at Monster Zero said that the movie “suffered from a weak final half hour filled with non-sensical technobabble” (to paraphrase). Um…were we watching the same movie? Despite the awkward flying mechanics for Megaguirus the final battle between him and Godzilla was one of the finest.

It’s really a damn good fight scene, with Godzilla pitted against a very different adversary like nothing he’s ever faced before. Megaguirus is blessed with godlike speed, fast enough to dodge Godzilla’s atomic breath. He really just wails on Godzilla for the bulk of the fight; it’s painful. The whole time I was screaming (in my head) “C’mon Godzilla, knock that ****er down!” And after about twenty minutes of abuse, Godzilla finally decides he’s had enough and just takes Megaguirus DOWN! The actor inside Godzilla was excellent, without a doubt. Much better than the actor who played him in Godzilla Against Mechagodzilla (or was that a statue?). When Godzilla finally retaliates successfully it is a real treat. And when he burns Megaguirus to the ground you can tell he REALLY wanted it. A most awesome fight.

But I’m getting ahead of myself, here. The movie’s plot goes something like this: The Japanese Government decides that the best way to destroy Godzilla is trap him in a black hole. Seems practical-enough, so they build an artificial black hole-generator. However, when they test it the machine causes a prehistoric insect called a Meganulon (those things from the original Rodan, to all you hardcore Godzilla experts) to eventually mutate into a gigantic monster dubbed “Megaguirus”. And, of course, he and Godzilla throw down.

I also have to say, I really liked the pacing of this film. It was fast, real fast. They decided not to waste the film with piddley human drama and just make it all about the monsters. And isn’t that WHY we watch Godzilla movies?

The Meganulons terrorize citizens of Tokyo in true Slasher-fashion. Indeed, parts of the movie seem like they came straight from a horror movie; there’s plenty of gratuitous gore and violence. Actually, it sort of reminded me of Godzilla vs. Destroyah and those 10-foot tall Destroyah creatures that stalked the SWAT team down inside the office building.

And by the way, this is the type of human drama I like to see in a Godzilla movie. The humans shouldn’t try to steal the show away from the monsters, they aren’t the reason I’m watching the movie. So many Godzilla films are almost ruined by really boring human drama that just drags and drags and drags (“Terror of Mechagodzilla”, for instance). This one moves at lightning quick pace and is very well acted. I actually finished the movie liking Kudo quite a bit, something I usually don’t feel about the humans (they’re different in every Godzilla film, why should I care about them?).

I really don’t understand the negative feedback given to this film in the Godzilla community. It is very good, and the second best of the Millenium series, in my honest opinion (“Giant Monsters All-Out Attack” reigns as my favorite).

But no film is without its flaws. The first appearance of Megaguirus is without a doubt one of the most painful moments I’ve ever experienced watching a Godzilla film. Why? I could see the freaking STRINGS! And I saw them TWICE! It’s 2004, people! This shouldn’t be happening! Megaguirus’ flying mechanics are quite ugly throughout his role in the film; you know that “it just wouldn’t work that way”. Megaguirus is a very well designed kaiju, though. He’s wonderfully gruesome in appearance and really looks like a monster out of a horror movie (such was the director’s intent, I’m sure).