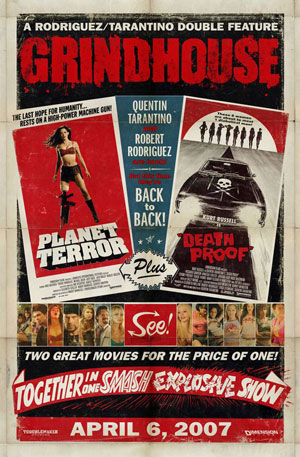 Robert Rodriguez’s and Quentin Tarantino’s “Grindhouse” harkens back to the days of 70’s snuff films and the theaters which showed them. I know, I know, “Quentin Tarantino doing a retro 1970’s film? NO WAY!!” Yeah, it may be Tarantino’s “thing”, but at least he’s good at it. Usually. Personally, I love snuff films and obscure horror flicks of the 70’s, like “Cannibal Holocaust”, “Last House on the Left”, “The Texas Chainsaw Massacre” and so on. So of course I got a kick out of this film.

“Grindhouse” goes out of its way to replicate the authenticity of the underground snuff theaters of the era, going so far as to include fake trailers for hilariously awful/awesome horror films, directed by current horror icons like Rob Zombie and Eli Roth. You’ve also got advertisements for “local” restaurants and vintage “now our feature presentation/coming attractions” bumpers. Boosting the “retro” look of the films themselves are the intentional use of grain, flickering, skipping and humorously placed “sorry, reel missing” cards. Trust me, it’s great.

The first film, “Planet Terror”, is the big snuff piece, packing in as much gratuitous sex and violence as an R-rating will allow. It would seem that a rogue military unit lead by Lt. Muldoon (Bruce Willis) have botched an attempt to purchase a deadly mutagenic nerve gas and accidentally unleashed it upon a small Texas town. The town begins to swarm with flesh-eating mutant zombies, which is never a good sign. An enigmatic sharp-shooter named Wray (Freddy Rodriguez) bands together with peg-legged go-go dancer Cherry Darling (Rose McGowen), grizzled sheriff Hague (Michael Biehn) and his dopey deputy Tolo (Tom Savini) to get to the root of the problem and stop the zombies at their source. Along the way, Wray crafts Cherry a machine gun/missile launcher leg and things get crazy (er).

I felt Robert Rodriguez’s “Planet Terror” was the stronger of the two films, or at least the most entertaining. It’ll be the one you leave the theater talking about, at any rate. It’s completely over-the-top in every conceivable way and absolutely unforgiving. You’d better have a strong stomach, otherwise you won’t make it very far. “Planet Terror” seems like more of a parody movie than an homage, with lots of textbook characters that play their clichéd roles more for laughs than anything else. So when this movie’s bad, it’s usually on purpose. While it can get a bit too silly for its own good, it’s still a blast. The finale, where Cherry goes apes*** with her new leg, is an absolute blast.

The second segment, “Deathproof” (directed by Tarantino), takes itself far more seriously and is considerably more low-key. So low-key, in fact, you can take a twenty minute-long bathroom break and not miss a freakin’ thing.

Stuntman Mike (Kurt Russel) likes to get his kicks by picking on helpless women out on the open road in his supped-up hotrod. It’s easy for him, considering his car is a former stunt vehicle and therefore “deathproof”. Mike successfully murders woman after woman…until he targets the wrong trio of ladies (Rosario Dawson, Zoe Bell, Tracie Thoms). Not to be f***ed with, these ladies turn the tables on Mike and take him on the ride of his life.

Tarantino took a rather interesting approach with this film, one that will likely bore many to tears. “Deathproof” can be broken up into two halves and in both segments, Tarantino lets the audience get to know the victims very intimately. This can get very, very boring. The first half is particularly irritating, as the pay-off after the extensive bar sequence is very minimal. The second half is even more torturous, as we have to get to know a whole new set of characters and suffer through a barrage of meaningless “girl talk” again. However, the second half rewards the audience for their patience with a very long and very impressive car chase sequence. Regardless, there’s so much empty space in “Deathproof” that you can safely take a bathroom break for however long you please and not fret over missing anything important.

The fake trailers in-between the two movies are hysterical, leaving me with hopes that they make a sequel and include these concepts. I mean, “Werewolf Women of the SS” starring Nicolas Cage and Bill Moseley? I’ll take eight tickets, please.

“Grindhouse” is a whole lot of fun and a total bargain at that. Two full length films for the price of one? Can’t beat that with a stick. While the second film is a bit weak, the first absolutely makes up for it. I highly recommend seeing this movie since, c’mon, you know everyone’s gonna be talking about it on Monday.