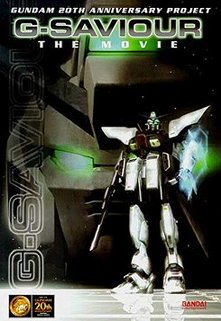 I’ve never been much of a Gundam fan. I’m more of a Transformers-guy, personally. Still, when I found this live action film in a DVD bargain bin at a local used record shop, I figured “what the hell” and dropped the $8 bucks for it. I got it mostly because I like seeing cartoons make the transition into live action, even if it’s done very poorly. And although I’m no Gundam expert, I can say with assurance that “G-Saviour” was done very poorly.

It’s Universal Century 223 and Earth has set up space station colonies known as Sides. The Sides have been in a political struggle with the Earth government known as CONSENT over independence. The Side known as Gaia has been the most aggressive and the key to their sovereignty just might lie in a formula for bio-luminescence which can make underwater agriculture a reality and eliminate famine. Former CONSENT soldier Mark Curran (Brennan Elliot) realizes that his former employers will do anything they can to get their hands on the substance, so he teams with a group of Gaian rebels lead by Cynthia Graves (Enuka Okuma) to get it from Earth to Gaia safely. Hot on Mark’s heels is his former commander of questionable moral fiber, Col. Jack Halle (David Lovgren), who has framed Mark for murder and is willing to wage war on Gaia if it means destroying the bio-luminescence formula. Gaia’s only hope to defeat the forces of Earth lies with Mark and his powerful Mobile Suit, G-Saviour.

The DVD box touts this movie as the special “Gundam 20th Anniversary Project”. I can’t imagine a worse way to celebrate a 20th anniversary than with a cheap, poorly scripted, poorly acted, poorly directed, poorly conceived made-for-TV-movie. This was apparently a joint production between Sunrise Studios in Japan and Polestar Television in North America and it left me thinking that something was lost in the transition overseas. Namely, the giant robots. The Mobile Suits seem like more of an afterthought in this movie than anything else. With a run-time of 95 minutes, you get maybe a total sum of 10 minutes of giant robot action. I may not know a lot about Gundam, but I do know that when I watch a Gundam movie there had damn well better be more than ten minutes of giant robots!

The bulk of the film follows the adventures of Mark and his gang of rebels as they try to escape Earth and get the secret formula back to Gaia. The characters are so two-dimensional I half expected them to float away on a stiff breeze. Mark is particularly wretched, being the stale soldier-who-quit-the-force-because-he-plays-by-his-own-rules-but-must-save-the-day archetype. And of course there’s the added bonus where he has to overcome his vow to never pilot a Mobile Suit again so that he can win the final battle, subplot. The rest of the cast are actually worse. You’ve got Dieter (Alfonso Quijada), a rebel who doesn’t trust Mark because he’s from Earth and gradually learns to respect him when he saves his life etc. There’s the aforementioned villain, Col. Jack Halle, whose evil just because. And so on and so forth. Needless to say, they occupy 85 minutes of this 95 minute movie and they do not carry it well at all.

The direction and cinematography are blander than a saltine cracker. Everything screams “made for TV movie”, from the uninspired camera work to the boring lighting. The sets also look especially cheap, particularly the cockpits of the Mobile Suits. They look like something I could have made myself with $50 bucks-worth of supplies procured at my local Home Depot.

I suppose if there had to be one upside to this movie it would have to be the Mobile Suits, scarcely as they’re used. Digital Muse choreographs some fantastic space battles and the Mobile Suits move very smoothly. The one downside is that the CGI is primitive. It does not blend well with live action surroundings at all and looks very cartoonish. Had this entire film been animated then the CGI would have been breath-taking. But as it stands, you’ll feel like you’re watching “Who Framed Roger Rabbit” at times. That bit of incompatibility aside, the final battle (all 10 minutes of it) looks great. Both Mark and Jack may have been terrible characters, but their brief Mobile Suit showdown was awesome.

But alas, ten minutes does not make a movie. Especially when the remaining 85 minutes are so painful you might sprout a brain tumor. I’m afraid I can’t recommend this to anyone, even if you do find it in a bargain bin for $8 bucks. I understand that even the hardcore Gundam fandom loathes this movie, if that tells you anything. View at your own risk.