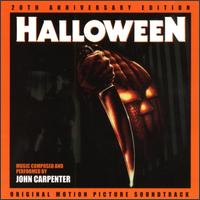 Whenever you come across a list of “essential” horror movies, Halloween is typically right there at the top. And with good cause, too. Not only did it bring the slasher genre to life (Black Christmas had been overlooked by the mainstream) but it’s simply a damn good horror movie on all fronts.

The plot is simple-enough. Incarcerated lunatic, Michael Myers, escapes from Smith’s Grove psychiatric hospital and makes his way back to his hometown, Haddonfield. When Michael was only a boy, he brutally murdered his older sister at random. Now he’s come home. However, his doctor, Loomis (Donald Pleasance) is hot on his trail. Laurie Strode (Jamie Lee Curtis) is babysitting that Halloween night in Michael’s old neighborhood and she and all her friends fall victim to the mask-wearing psychopath.

The synopsis may not sound very complex, but it’s the simplicity of the concept which makes the movie work so well. John Carpenter takes something so standard, and with his trademark use of sound and lighting, turns it into a horror masterpiece.

Carpenter’s use of light and shadow is possibly the best in his career. Michael materializes in and out of dark corners and shadows like a specter, leaving the audience never quite sure just where in the room he’s hiding; and it’s usually where you least suspect. This method of stalking from the darkness is enhanced by the movie’s theme of “the Boogeyman”; the childhood monster that lurks in closets and under beds. Michael Myers really does embody the concept of the Boogeyman from head to toe.

Then there’s one of my favorite elements from John Carpenter’s movies, the score. Back in the “classic” days of Carpenter’s career, the one thing you could always expect was a haunting electronic melody to provide a creepy atmosphere no other director could match. Carpenter’s Halloween theme is by far his most well-known work, and next to likes of Psycho, is possibly the most famous of horror movie themes.

Donald Pleasance and Jamie Lee Curtis, in two of their better roles, bring a welcome sense of professionalism to the movie, keeping Halloween above the typical scorn slasher movies receive from the general audience. Michael Myers (or as he’s credited, “the Shape”) is really the star of the show, however. One would never expect that a William Shatner mask could possibly be so scary. Apparently, Carpenter’s original intention was to use a clown mask; the repainted William Shatner mask was a last minute change. A change for the better, I’d say, as the blank, featureless face lends a completely different kind of unsettling appearance to the character.

Halloween is a horror movie that takes a number of elements and blends them together into virtual perfection. Definitely one of the “essentials” not just for horror fans, but for fans of any kind of cinema.