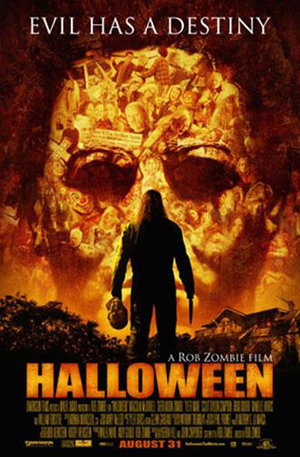 I enjoy Rob Zombie’s music (saw him at the Nissan Pavilion in ’06), I enjoyed his last two movies (“House of 1000 Corpses” and “Devil’s Rejects”), but unfortunately I did not enjoy his reinvisioning of John Carpenter’s “Halloween”. Rob Zombie chose to recast a number of the players from his previous films, who honestly aren’t that good, and interject some of his trademark manic and dark humor in instances where it really wasn’t necessary. Zombie refused to refer to this film as a “remake”, as he swore it would be its own entity and his own vision of the Michael Myers story. However, after the halfway point, what we’re left with is pretty much the original film only compressed to half the time with shallower characters and a less-talented cast. Zombie can call his version of the film whatever he likes, but at the end of the day, it’s still a remake. And not a very good one, at that.

Michael Myers (Daeg Faerch) is a troubled little ten year-old. His family life is a wreck, the kids at school bully him, he has an Oedipus Complex going on with his mother (Sheri Moon Zombie) and in his spare time he enjoys torturing small animals. Is it really any surprise when little Michael snaps and goes on a killing spree, leaving only his infant sister and mother alive? Michael is committed to the Smith’s Grove Sanitarium and placed under the care of Dr. Samuel Loomis (Malcolm McDowell). As Michael grows older he gradually draws deeper into himself until what’s left is hardly human at all. Halloween, seventeen years later, a larger and more menacing Michael (Tyler Mane) escapes from Smith’s Grove and carves a path of destruction leading back to his hometown of Haddenfield. Michael intends to find his sister, Laurie (Scout Taylor-Compton), and only Loomis can hope to save her from certain death.

The first half of the film is a detailed look at Michael’s childhood, from the events which lead to him going nuts to his days festering in Smith’s Grove. I felt Zombie’s style of directing as well as some very poor cast choices pretty much killed the entire act. The scenes where Michael’s mom is being menaced by her deadbeat alcoholic husband come off far more humorous than depressing or uncomfortable, sending the audience into fits of laughter. You don’t feel a thing for Michael and it sets a very poor tone for the entire movie. Sheri Moon Zombie is completely devoid of anything even approaching acting talent, so in compensation Zombie inexplicably makes her a stripper. As hot as she is, I don’t go to movie theaters to jerk off (that’s what got Pee Wee Herman in trouble, after all), so all her exotic dancing is pretty much meaningless.

This “origin” for Michael is what I assume Zombie meant as his “reinvisioning”. Where-as Carpenter simply made Michael out to be a normal kid with a normal family who snapped without notice, Zombie spares no time showing us that Michael was a sick little monster long before he killed anybody. I typically don’t mind remakes that take their own unique approach to characters and origins (Michael’s origin had already been screwed up in previous films like “Halloween 6”), and I might have liked this backstory had Zombie not felt obligated to shoehorn his feather-brained wife into such a prominent role or added humor to scenes that needed to make us feel for the character, not laugh at him.

Malcolm McDowell adds a touch of class to the flick and plays a very good Loomis. Obviously, Donald Pleasance will forever own the character, but McDowell does a splendid job regardless. The scenes with him trying to interact with young Michael at the sanitarium were the best moments in the first half and flesh Loomis out as more than an obsessive lunatic determined to kill his former patient.

The second half of the film is basically the original “Halloween” compressed into an hour or so. It follows the original film’s layout pretty much identically save for the climax, where Zombie adds his own touch to things. I think what bugged me most about all of this was that for some reason Zombie felt that every character should say “fuck” at least a half dozen times. I’m no prude when it comes to foul language, but the amount of pointless cursing in this movie made the whole flick look downright juvenile.

Laurie’s friends are killed off almost as quickly as they’re introduced and the kids like Tommy Doyal (Skyler Gisondo) are pretty much only there because they were in the original film. One of my favorite character actors, Brad Dourif (Chucky from “Child’s Play”), makes it in as Sheriff Brackett, but the entire second half of the movie tries to fit so much in such limited space that his part is fairly unremarkable. Honestly, the entire second half is just one kill after another with little to no characterization for anybody but Michael and Loomis.

I’m not positive if I liked the ending or not. I’m relieved that it deviated from the original’s, but at the same time felt it was entirely soulless. And that’s probably what best describes Rob Zombie’s version of “Halloween”, soulless. It comes across like he just recast his buddies from his earlier movies so they could make a quick buck, he threw in his wife so he’d get her to do something freaky with him in the sack and he only applied a mediocre amount of “vision” to his “reinvisioning” because he never really cared. Rob Zombie’s “Halloween” isn’t the worst film in the Halloween franchise, but that’s largely because it doesn’t feature Busta Rhymes screaming “Trick or treat, mutha fucka!”