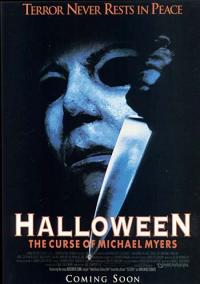 Widely known as the WORST film in the Halloween franchise (well, at least until Halloween: Resurrection was released), it was so bad it even ended the Halloween continuity. Halloween H20: 20 Years Later was, in fact a direct sequel to Halloween 2, ignoring the previous 3 movies. While, personally, I’m not sure if Halloween 6 was the worst film in the franchise at that point, (Halloween 5 was pretty abysmal) but I would agree that it was really really bad.

Halloween 6’s problem is that it tries to explain why Michael kills. In the previous installments, Michael’s sole motivating goal in life is to track down the members of his family and kill them. Why? Because he’s freakin’ CRAZY! However, not everybody agreed, and so we got Halloween 6.

Apparently, Michael is a child from the Cult of Thorn. Once every couple centuries, when the planets are rightly aligned (for the love of god…) a child is born with a thorn-shaped birth mark. The child is magically (yes, magically) destined to kill every member of his family as a sort of sacrifice to the Celtic gods of Samhaine. However, the problem is that the Child of Thorn can only kill on All Hallow’s Eve, hence why Michael keeps taking those year-long naps. The Cult of Thorn is getting a little sick of waiting for Michael to finish the job, so they kidnap him and his niece, Jamie. Then, at some point between Halloween 5 and 6, Michael rapes Jamie (wha?). Well, Jamie escapes with her son and Michael heads out after her. He finishes her off, at long last, but the baby winds-up in the custody of Tommy Doyle. Long time fans of the series will recognize him as the kid Jamie Lee Curtis was baby-sitting in the original (he’s aged rather gracefully).

To further complicate matters, the Cult of Thorn needs an heir to Michael’s curse, and they have their eyes on a kid named Danny who has been having visions of a mysterious man in black. The SAME man in black from the end of Halloween 5. Who IS this mysterious man in black? Some guy who showed up at the beginning of the movie for 5 minutes. I swear, this movie was written by the same staff that brought us Scooby Doo, Where are You? and Speed Buggy.

And that’s just the general outline. Loomis is back, though old age has 90% killed him. Donald Pleasance’s role in the film seems severely shortened. It’s like he’s only there for the sake of tradition. He isn’t even present for half the movie, spending the climax unconscious in an office.

The ending pretty much drops everything about the cult and what they’re up to in exchange for a pointless chase through a hospital with one of the most dull and lifeless finales in the franchise. It’s not all that surprising this movie very nearly killed the franchise, now that I think about it.

The guy they got to play Tommy was way too young. Tommy was 8 years old in 1978, and apparently in 1995 he’s only 18 or 19. Jamie, the star character of Halloween 4 and 5 is criminally under-used in this installment. Her death is quick and unsatisfying, hardly worthy of the character that made Halloween 4 watchable and was possibly the only good thing about Halloween 5.

To make matters worse, this film is packed with logic errors and plot holes the size of John Carpenter’s bank account. Michael seems capable of teleporting from on end of the city to the other in a span of minutes. The Cult of Thorn starts out prominently but then fades out toward the end of the movie and becomes nothing more than an after-thought. The whole purpose of the Cult of Thorn is hardly fleshed out beyond “We’re evil” and their reasoning and motives are only vaguely expressed at best.

Halloween 6: the Curse of Michael Myers seemed like it might have had a couple good ideas but they’re completely erased by non-sensical pacing and all the most clichéd horror scares in the book.

Halloween 6 gets a D-, and that’s being generous. The only film in the franchise that’s worse is that Busta Rhymes installment. Anybody actually interested in this movie is better off hunting down a copy of the Producer’s Cut.