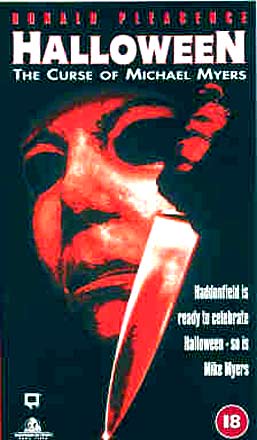 The Producer’s Cut of Halloween 6 (released theatrically as Halloween: the Curse of Michael Myers) has yet to be officially released on video or DVD. It’s a mystery as to why, considering the Producer’s cut of this film is actually rather pleasant. At the very least, it makes SENSE, as opposed to the theatrical cut, which is one big plothole.

The general plot for the Producer’s Cut is nearly identical to that of the theatrical version. Basically, the Cult of Thorn has been controlling Michael since day one. He is destined to kill his family as a sacrifice to the Celtic gods of Samhaine. However, once Michael achieves this goal, a new child of Thorn must be selected. The Cult has their eyes set on Danny, a boy living in Michael’s old house. Tommy Doyle, survivor of the first Halloween, is charged with protecting Danny from the Cult as well as Michael’s illegitimate son.

The basic plot is the same, but the story-telling is measurably different. One of the most major differences is Jamie’s death. In the theatrical cut, it was quick and basically came off as a cheap way to get her out of the film. In the Producer’s Cut, she survives her attack from Michael and is taken to a hospital, where Loomis spends a portion of time watching over her. While in the hospital, she has a dream sequence which makes it perfectly clear that Michael raped her and that’s where his illegitimate child came from. That part of the story was glossed over for the most part in the theatrical cut. This slower death was a much better send off to Jamie, who had been the heroine of the previous three films.

Then there’s Loomis. Nearly all of Donald Pleasance’s scenes were actually CUT from the movie for the theatrical edition, giving him very little to do. In the Producer’s Cut, he’s an essential piece of the plot. He is actually selected by the Man in Black to be the next guardian of the Child of Thorn (the Man in Black had been Michael’s guardian). He is also a major factor in the climax of the movie, being essential to the film’s cliffhanger.

And finally, the entire second half of the movie, at least all the scenes at Smith’s Grove, is different. The Theatrical Cut basically does away with the entire Curse of Thorn concept in exchange for a rather hackneyed chase scene through the hospital. The Producer’s Cut, however, furthers the Thorn story and helps flesh out Michael’s character a great deal. I won’t give too much away, but Michael gets a much better send-off in this film than in the Theatrical Cut.

The Thorn idea may not sit well with most Halloween fans, and I agree, it was a rather silly concept. However, the Producer’s Cut of the movie flows MUCH better with the Jamie arc of the franchise (movies 4, 5 and 6) than the theatrical cut, and is a far superior finale to that continuity (Halloween H20 ignores 4-6 and is a direct sequel to Halloween 2).

I give the film a C. It’s not the best installment in the franchise, but at least it’s coherent.