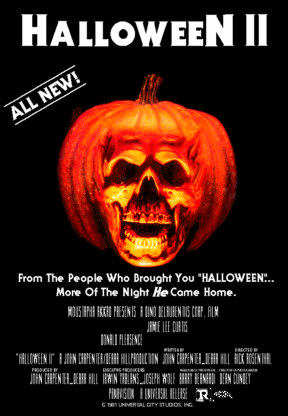 Not everyone immediately appreciates Halloween II, and I suppose I can’t really blame them for not being extensively impressed with the film. At a glance, the lead criticism is that, while the original Halloween was an original horror masterpiece, Halloween II brought very little to the table. John Carpenter’s original vision for the franchise was a series of individual Halloween-themed films every few years. However, the demand for more Michael Myers action led to this sequel, which was meant to conclude his story. The end of this film makes it expressly clear that neither Michael or Loomis were ever meant to make a comeback. Rick Rosenthal does a fine job emulating Carpenter’s directorial style, and indeed, many mistake this film for having been directed by Carpenter himself. Never-the-less, it’s all just a little too…boring.

Picking up immediately where the first film left off, Laurie Strode (Jaimie Lee Curtis) has been taken to a hospital to be treated for her wounds while psychopath Michael Myers is still on the loose. Dr. Loomis (Donald Pleasance) continues his mad quest to eliminate his former patient, and while tracking his prey, uncovers a terrible secret which links Laurie and Michael together. Meanwhile, Michael makes his way to the hospital to finish the job on Laurie and a massive slaughter ensues.

The original Halloween was more of a thriller along the lines of Alfred Hitchcock’s Psycho. Halloween II, however, is more in tune with the slasher genre and gratuitous violence everyone recognizes the series for. I won’t say that’s a bad thing, as I adore gratuitous violence and slasher mayhem, but it does result in a marked decline in quality from one film to the other.

While the original Halloween scarcely had a drop of blood visable on screen, Halloween II goes out of its way to lay on the gore. One of my favorite kills involves a woman getting her face boiled off in a therapeutic hot tub. Michael Myers’ weapon of choice in this installment is a scalpel, as opposed to his more notorius weapon, a kitchen knife.

There’s also the big revelation that Laurie and Michael are blood related. This concept would play a big role in future Halloween films, particularly the Thorn Trilogy (Halloween 4, 5 and 6) which states that Michael is driven to kill every member of his family. While some appreciate knowing Michael’s true motivations, I, personally, would rather be left in the dark. All we knew about Michael in the first film was that he was nuts and wanted to kill people. And really, that was enough. A convoluted back story linking the two characters together is really unnecessary.

Still, at the same time, I recognize the need to add a little more depth to the story than “he’s crazy” since, had they gone that root, all future sequels featuring the character would have been incredibly thin.

While I’m harping on this film rather fiercely, I won’t say that I absolutely dislike it. Halloween II is one of the better installments in the franchise and, despite some story elements I don’t particularly appreciate, is a worthy companion to the original. Even though they had been produced three years apart, the two films run together fluidly and you can almost view them both as one really long horror film.