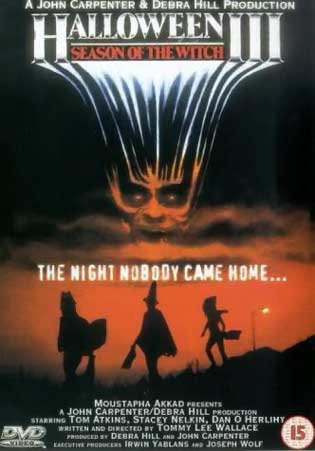 Halloween III is widely regarded as the worst film in the Halloween franchise, which is quite an accomplishment, considering how bad many of the later installments are. I mean, it may have lacked Michael Myers, but at least it didn’t burden the audience with Busta Rhymes. And therein lays the number one complaint from most: no Michael Myers. The reason for this is that John Carpenter’s initial vision for the franchise was an anthology series of original Halloween-themed horror films every few years, not a slew of predictable slasher episodes. Halloween III was their attempt to fulfill this vision, and regrettably, the audience did not approve. Perhaps they would have been better off dropping the film’s numerical placement and simply called it “Halloween: Season of the Witch”; the number three unfortunately implied a return of the William Shatner-faced maniac.

This film centers on Dr. Dan Challis (Tom Atkins) who is sucked into a bizarre mystery after one of his patients hands him a Silver Shamrock Halloween mask shortly before being murdered in his hospital bed. Dr. Challis travels to the Silver Shamrock factory along with the dead man’s daughter (Stacy Nelkin), Ellie, to search for answers. Their investigations through the creepy factory lead them to the villainous Conal Cochran (Dan O’Herlihy), a Celtic warlock/businessman who has sinister plans for the children of America. It seems his line of Silver Shamrock masks each contain a portion of Stone Henge’s dark power, which is enough to cause the head of every child in America to explode into snakes and spiders.

I wouldn’t go so far as to call Halloween III a bad horror film, but a mediocre one to be certain. Tom Atkins (an 80’s horror movie icon, starring in films such as the Fog, Maniac Cop and Night of the Creeps) does a commendable job and the entire film, despite having been directed by Tommy Lee Wallace, oozes a pure John Carpenter vibe. That element is probably a result of the score provided by Carpenter, consisting of his trademark eerie keyboard music and effects.

No, I suppose what really drags the film down is the over-the-top nature of the story. I mean, we’re talking magic Irish robots, here. There are a few memorable scenes of horror, like when the assassin murders the old man by gouging out his eyes then snapping the bridge of his skull, or when the assassin kills himself by dousing his face in gasoline and detonating his car, or the big scene where the kid’s head explodes into creepy crawlers. They’re all pretty good, they’re just not in a very good movie. Then there’s that damn jingle, “Have a Happy Halloween, Halloween, Halloween! Have a Happy Halloween, Silver Shamrock!” It’s catchy…too catchy. You may very well have it stuck in your head for weeks.

I don’t hate Halloween III, quite the contrary, I enjoy it for its camp-value and overall John Carpenter-ness. However, it isn’t going to please the mainstream audience who instantly associate the Halloween franchise with Michael Myers. I liked the anthology idea Carpenter had originally intended for the franchise, but I have to admit, he might have faired better had he chosen to go with a stronger script for the big departure film. As it stands, I have to give Halloween III: Season of the Witch a C.