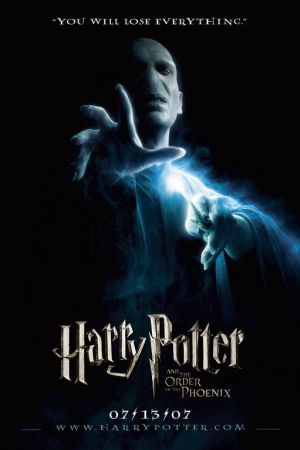 If I was ten years old, I’d be all over this stuff. As it stands, the Harry Potter franchise isn’t something I actively pursue as hobby. It’s not really that there’s anything fundamentally wrong with Harry Potter, it’s just that it isn’t my cup of tea. Still, I’ll admit the movies have a certain charm to them and when put together they make a pretty epic tale. This most recent installment, though I found it a bit less exciting than “Harry Potter and the Goblet of Fire”, is a worthy follow-up to the tale of everyone’s favorite bespectacled wizard-in-training.

It’s the fifth year at Hogwart’s academy and things could be going a lot better. It would seem that the Ministry of Magic refuses to believe that the Dark Lord Voldemort (Ralph Fiennes) has returned, and using its connections in the newspaper the Daily Prophet, is gradually swaying public opinion against Hogwart’s, Dumbledore (Michael Gambone) and Harry Potter (Daniel Radcliffe). To make matters worse, the Ministry has sent one of their own, Dolores Umbridge (Imelda Staunton), to observe and restructure Hogwarts in a manner that is crippling to both the students and the faculty. Meanwhile, Voldemort is amassing his own army and only a secret organization known as the Order of the Phoenix can hope to convince the Ministry to prepare for the battle that lies ahead.

I’ve never read the books, so I can’t comment on whether the adaptation was true to the source or not, but I can say that the script and editing made it feel like there were a lot of missing moments that didn’t make the transition from paper to screen. The movie moves at a lightning fast pace, throwing so much at the audience in such rapid succession that keeping up can be a challenge. I’m sure the Harry Potter aficionados in the audience had no trouble following along, but the less educated souls (such as myself) are at the risk of being left in the dust.

Several new characters are introduced in addition to all the old ones still hanging around, making everything feel a bit cramped. I’m not sure if it was just the editing or the fact that there are still more movies on the way, but there were several threads, both large and small, that are left hanging. I know that the larger stuff, such as Voldemort’s army aren’t meant to be covered in this installment, but the lesser threads such as Harry reconciling with Cho (Katie Leung) are left wide open. I’m also not sure if some of the other aspects introduced, such as the centaurs, are important or just convenient MacGuffins. I suppose I’ll find out when the next movie hits theaters in a year or so.

As far as the film’s major conflict goes, Voldemort plays second fiddle to the movie’s real villain, Umbridge. She has this double-faced evil-yet-perky thing going on, which is fun, but all the while I just wanted to see more of the cool villain. You eventually get pay-off in that regard at the climax, and the battle between Dumbledore and Voldemort was pretty intense, but it all felt a bit stretched out and uneven.

There’s some light political commentary mixed in there, what with the Ministry of Magic being run by an inept bonehead, refusing to believe that anything is wrong and using his control of the media (the Daily Prophet) to brainwash the people into believing whatever he tells them. I think it reflects rather poorly on the characters in the movie, considering so many of them would turn around and despise Harry just because their newspaper told them to. Of course, Harry’s closest friends stand by him, but others still need some convincing.

I suppose “unfocused” best describes “Harry Potter and the Order of the Phoenix”. It all feels more like a prelude to the next movie or possibly the movie after that. I’d say it’s a definite step downward from “Goblet of Fire”, but not so much as to make it a bad movie…just a bit unsatisfactory.

For another look at the film, check out Griffith’s review at our sibling site, Forever Geek.