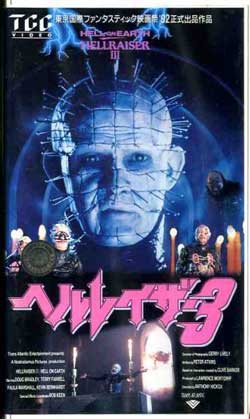 Movies like Hellraiser III and Phantasm III are perfect examples of what happens when the studio has more power over the movie than the creator. The result is a soulless waste of time, catering to the trends of the era at the expense of its own identity. Clive Barker took on an executive producer’s role for this installment, and while his name is slapped all over the box, his presence is noticeably distant from the actual product.

After the events of Hellbound: Hellraiser II, the Pinhead Entity has been bound to the Pillar of Souls, while his host, Captain Elliot Spencer, has been left adrift in limbo. While (trying) to cover a story at a New York City hospital, reporter Joey Summerskill meets a young girl named Terry who has taken possession of a certain puzzle box. Joey follows Terry back to a club called the Boiler Room and meets the club’s owner, a jerk named J.P. who loves the pleasures of life but can never get enough. Luckily for J.P., he’s an art collector and has taken possession of the Pillar of Souls. Pinhead uses J.P. to escape his prison, and now that he’s free from the Leviathan’s rules, Pinhead is prepared to bring Hell to Earth. Joey is the only one who has the power to stop him, but unlocking the secrets of the Lament Configuration won’t be easy.

The overall story sounds good in summary format, but the movie-itself doesn’t live up to its own potential. The acting in this film is utterly diabolical, with Joey and Terry being phenomenally inept at the art. However, Joey’s cameraman is the worst of the lot, delivering his lines with the subtlety of somebody reading off of cue-cards. On the bright side, Ashley Laurence reprises her role as Kirsty for a brief cameo. The direction also lacks the dreamy, surreal atmosphere present in the previous two films and instead goes for the loud, in-your-face rock & roll approach. The haunting theme from the previous movies is still present but seems completely out of place within this hackneyed, run-of-the-mill slasher film.

Doug Bradley is one of the few redeeming elements of the film, with Pinhead being practically the only good character Hellraiser III has to offer. The Pinhead Entity, free from Spencer’s presence, has a very different personality than in the earlier installments. He screams and laughs quite a bit, and at times comes off like a bad Freddy Krueger. Never-the-less, when Pinhead isn’t going off the deep end, he delivers some very memorable dialogue. Many of his best lines stem from this film. Despite the occasional moments of very poor direction, Doug Bradley brings Pinhead to life just as perfectly as he does in any other installment.

The Cenobites in this film are a total joke, regarded as the most ridiculous ones in the entire series. You’ve got CD, a guy with CDs jammed in his skull, who hurls the razor-sharp disks at people like ninja shurikens. There’s Barbie, a guy covered in barbed wire who bursts through brick walls like the Kool-Aid Man and breaths fire. Camerahead…a guy with a camera in his head and zero acting skills. Then there’s two more who show up at the very end; I won’t ruin their identities for you but I’ll assure you that they’re just as lame as the three mentioned above.