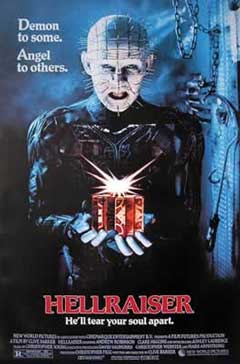 In many of my reviews I mention “essential” horror films (Evil Dead, Phantasm, Creepshow, etc) and I have to say, once again, that this is an essential horror film. The premise is extremely fresh and inspired, the cast is exquisite, the gore is tremendous, the music is haunting, the characters are memorable and the special effects are impressive. Writer and Director Clive Barker really crafted a winner, here.

Larry and his wife, Julia, have just moved into their old house where Larry’s brother, Frank, had been hiding out. Frank, a hoodlum in search of the greatest pleasures life has to offer, got into the occult and acquired a strange puzzle box (the Lament Configuration). However, once he opened it, a doorway between Earth and Hell unlocked and let loose the Cenobites, who dragged him down to Hell. And this was in the attic of Larry and Julia’s new home. When Larry accidentally spills blood on the floorboards, Frank manages to bring himself back to Earth, albeit in a very gooey, discorporated state. Julia, who had had an affair with Frank, discovers him and agrees to help him become whole again out of lust. She begins bringing him victims whose flesh he needs to rebuild his own body. Meanwhile, Larry’s daughter, Kirsty, finds the puzzle box and has her own dealings with the Cenobites.

The Cenobites, despite being background characters and hardly appearing in the movie at all, really do steal the show. Pinhead (who technically wasn’t named until the sequel), as portrayed by the great Doug Bradley, carries a very sinister presence in both appearance and voice (his voice was manipulated to sound more demonic, you should see the scenes before the voice over effects are added; hilarious). The Female Cenobite and Butterball both look rather cool, but are the weakest of the lot. The Chatterer has obtained quite a following, appearing in more movies than any other Cenobite save for Pinhead. Then there’s the Engineer; strictly badass.

Hellraiser is based on Clive Barker’s novella, “The Hellbound Heart”. Hellraiser is both a remarkably accurate adaptation and an overall improvement of the source material. The overall story and structure of Hellraiser is identical to the Hellbound Heart, save for a few key and not-so-key differences. First off, Larry is called Raury in the book. Supposedly, his named was changed to Larry for the film because Raury sounded “too British” for an American audience. Also, Kirsty, in the book, is a friend of Raury’s rather than his daughter and has harbored an attraction to him all her life. I prefer the daughter-angle, honestly, as it gives her and Larry a much deeper and more powerful connection, which is carried over into the sequel (Hellbound: Hellraiser II). The Cenobites appear even less in the book than they do in the movie and receive very little description. The lead Cenobite is a genderless being while the “Pinhead” Cenobite is actually female. The Engineer is also presented as the overlord of the Cenobites and has no physical form but is instead a being of pure energy rather than a giant worm-creature.

The book also had a few elements which I liked that didn’t make the transition to film. The scene where Frank first summons the Cenobites is much longer and more complicated in the book. When the Cenobites arrive, they deliver the promise of pain and pleasure; Frank experiences every orgasm he’s ever had in his entire life all at once. The intensity of the pleasure causes him to ejaculate all over the floor. THIS is how he’s able to come back in the book, as when Raury’s blood mixes with his semen it becomes the catalyst for Frank’s rebirth. In the movie, the Cenobites just show up and rip him to pieces. Not much pleasure involved, there. Another detail from the book was that after Kirsty made her deal with the Cenobites, they kept a psychic leash over her. It was like a noose tightening around her neck. It added a bit of intensity to her dilemma, as her clock was slowly ticking away.

Hellraiser is more low-key then the other theatrical installments in the film, and really comes off more as a haunted house movie than the Hellish epic it’s known for. Still, it lays the groundwork for the extensive Hellraiser mythos and is a fantastic horror film even if you don’t plan on seeing any of the sequels.