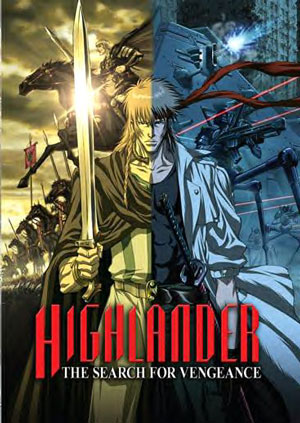 When I heard they were making an animated Highlander feature film, I was relatively unimpressed. Highlander has had a very…”rocky” film and television history, to be polite, so I was expecting some more uninspired tripe along the lines of the ill-conceived and short-lived Highlander: the Animated Series. What I got was something completely unexpected: an animated film ripe with memorable characters, engaging storylines, mind-blowing fight scenes and drop-dead gorgeous animation. “Highlander: the Search for Vengeance” should be on every animation fan’s shelf, regardless of whether they give a damn about the Highlander franchise or not.

Colin MacLeod (Alistair Abell) is a Highlander: an immortal swordsman doomed to walk the Earth until all of his kind have slain one another. Centuries ago, MacLeod saw his beloved wife, Moya, crucified by a Roman General and fellow Highlander, Marcus Octavius. And so began a centuries-long rivalry that has lasted into the distant future. In a post-apocalyptic world, Colin has found Marcus ruling over a decimated Manhattan from his golden tower. Colin is joined by a group of rebels who need to stop Marcus from unleashing a virus that will murder thousands. However, their lives are immaterial to him, as Colin cares only for vengeance.

Yeah, I know, a Highlander in a post-apocalyptic future reeks of “Highlander II: the Quickening”, and the mere mention of that title might be enough to frighten off any decent Highlander fan in the audience. Well, let me just say, “Highlander: the Search for Vengeance” is everything “Highlander II” should have been. You know, good.

As far as continuity goes, I’m not the biggest Highlander buff in the world, so I’m not exactly sure how or even if it works into the established Highlander timeline, and I really don’t care. Whether you know everything about Highlander or nothing about Highlander, it doesn’t matter. This movie is a stand-alone tale which nicely recaps the Highlander mythos and holds up by itself, isolated from the rest of the franchise. It is very friendly to new-comers or just casual fans like myself, but is chalk-full of enough references and…just…Highlandery stuff to appease even the staunchest fanboy.

I think the most important place to start is the animation. When I bought the DVD I was entirely expecting something nice but cheap-looking, like the “Ultimate Avengers” animated films. Straight-to-video animation is usually good but never impressive. Well, let me say something so important I’m writing it in bold text: this movie should have been released in theaters. The animation is provided by Madhouse Studios, the same people who have given us “Ninja Scroll”, “Vampire Hinter D: Bloodlust”, “Perfect Blue” and HBO’s Spawn the Animated Series. On top of that, the animation was directed by the celebrated and endlessly talented Yoshiaki Kawajiri, the director of “Ninja Scroll”, “Vampire Hunter D: Bloodlust” and “Wicked City”. So if you’ve seen just one of the films mentioned, you should know to expect some heart-pounding fight sequences and brilliantly innovative “camera” work. The animation in this film is so absolutely breath-taking it boggles the mind that it went straight to video. This movie has all the hard work and technical achievements of a big-budget theatrical animated film.

So if you haven’t guessed by now, “Highlander: the Search for Vengeance” is a collaboration between the United States and Japan. It was written by David Abramowitz, who might be best known to you Highlander fans as the guy who wrote Highlander: the Series and Highlander: the Raven. So needless to say, this guy knows his Highlander stuff. The story of Colin and Marcus as they battle through the ages is fantastic and epic. You loathe Marcus for his Hitler-esque desire to prune humanity into his vision of a master race, but you loathe Colin almost as much for being such a cold-hearted and single-minded zombie. There are other memorable characters in the film, as well. I wasn’t expecting to like Delilah, the prostitute rebel with a heart of gold, but Abramowitz actually works her character into something exceptional. Her sacrifice at the end of the film is especially moving. Then there’s possibly my favorite character, Amergan, the disembodied spirit of a Druid Priest who has haunted Colin across the centuries. He provides some of the comic relief and is personified expertly by Scott McNeil, one of the most prolific and popular voice actors in the industry. But he provides more than just well-timed wise-cracks, he’s actually out to try and coerce Colin from the dead end path of vengeance. I especially enjoyed his little revelation at the end which snaps Colin out of it.

“Highlander: the Search for Vengeance” is bound to be overlooked by the general public, what with Highlander not being the money-making machine it once was. Still, anyone who enjoys animated action films, and really, anybody who enjoys action films period should get a real kick out of this. Definitely one of the best releases of the year and it’s a real shame it wasn’t shown on the big screen.