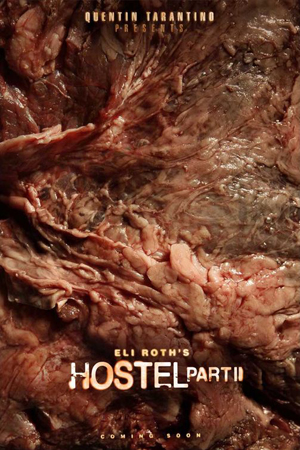 Hollywood horror always works in trends. In the 80’s, it was the slasher genre. The 90’s were the era of “Scream” clones (trust me, there’s a big difference between 80’s era slasher flicks and the “Scream”-inspired slasher flicks of the 90’s). And recently, the trend has been faux-snuff pictures. Eli Roth’s “Hostel” series is the next in the long line of these flicks, desperately attempting to revitalize the 70’s Grindhouse experience, harkening back to films like “Last House on the Left” and the original “Texas Chainsaw Massacre”. However, unlike his first installment, which I found to be rather luke-warm, “Hostel: Part II” is an overall more entertaining and exciting experience and most definitely a superior follow-up.

Three college girls touring Europe are sidetracked and lured into a backwater Slovakian hostel for some fun. Little to they know, upon entering the hostel, each of the girls were auctioned off by the insidious Hunter’s group and purchased by two American entrepreneurs. After they let their guard down, the girls are taken to a secluded factory where they are each tortured ruthlessly by those who were willing to pay for the experience.

The first “Hostel”, despite a promising idea, didn’t do much for me. I felt it was a bit too slow in getting to the point. “Hostel: Part II”, on the other hand, spends much less time screwing around. It manages to tie up a few loose ends left after the previous installment, as you discover the fate of that film’s survivor, Paxton (Jay Hernandez). But once that’s over with, a new story begins which is very friendly (in a manner of speaking) to new audiences who are not familiar with the first episode.

There are two different plot threads going on during this film which gives you two different perspectives to enjoy. This is one of the sequel’s stronger concepts and something I thought made it an improvement upon its predecessor. The first perspective is the obvious one: the stupid American tourists. Like most horror movies, the youngsters are annoying and shallow and you end up rooting for their demise. Well, except for the one level-headed main protagonist. Yeah, nothing new in this angle, though there is a nice twist ending which deviates from that of the original. Defying expectations, “Hostel: Part II” actually doesn’t recycle the climax of the previous installment.

The other point of view comes from the two American yuppies who purchased the kids for torture. I found their plotline to be more interesting. One is morbidly enthusiastic about torturing his victim, while the other is morally hesitant. There’s a nice twist in their story, as well.

Of the faux-snuff films that have been showing up in recent years, “Hostel: Part II” is one of the better ones. Sure, it’s no “Cannibal Holocaust”, but those days are long gone. Obviously this movie isn’t intended for the feint of heart, with several absolutely brutal and twisted sequences of torture and gore that’ll have you wincing in your seat. So, hey, good stuff.