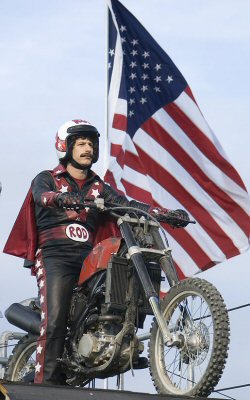 For whatever reason, 2004’s “Napoleon Dynamite” was a smash hit, so imitators were bound to spring up sooner or later. Akiva Schaffer’s “Hot Rod” recycles most of what made the aforementioned 2004 comedy a resounding smash, but factors in little of the charm or originality, resulting in a rather bland, boring and abysmal excuse for “entertainment”. And as someone who didn’t even think “Napoleon Dynamite” was very good, suffering through a thinly-disguised knockoff was no small endeavor.

Rod (Andy Samberg) has dreams of becoming the next big stunt cyclist in honor of his late stunt champion father. However, he sucks. When his abusive stepfather Frank (Ian McShane) comes down with a fatal ailment, Rod kicks his efforts into high gear in order to raise the money to save his life…not so much out of affection, but more so he can finally prove to the old man that he’s got what it takes. Cheering him along is Denise (Isla Fisher), his boyhood crush who suddenly steps back into his life and joins his crew.

How would you describe “Napoleon Dynamite”? “A socially-challenged nerd with delusions of grandeur and his slew of equally pathetic friends live in a small town that’s trapped in the 1980s and try desperately to prove their worth”? Toss in a plot about stunt cycling and you’ve pretty much got “Hot Rod”. Include a bizarre scene where the main character tries to dance and the allusion is complete. I’m not entirely against films that are “inspired” by earlier successes, but when you create a film that’s almost a carbon copy of another movie solely to leech of its popularity, well then you attract my ire.

Like the star character, the humor in “Hot Rod” misses the mark more often than not. Screenwriter Pam Brady, when not busy ripping material from other movies, has come under the delusion that “weird” automatically equals “funny” and not in a zany “Naked Gun” sort of way, but in a completely non-sensical “was that even a joke?” sort of way. Much like another ill-conceived film inspired by “Napoleon Dynamite”, “Kickin It Old Skool”, “Hot Rod” also suffers from the ridiculous notion that all references to 80’s pop culture are automatically hilarious solely because they are references to 80’s pop culture. This just isn’t true. Random mentions of “Voltron” and a soundtrack consisting of the likes of Europe can’t replace well-written, well-timed jokes, no matter how badly you want to ride the ever-shrinking wave of 80’s nostalgia.

I suppose “Hot Rod” isn’t entirely without merit. A small handful of the gags in the film were pretty inspired, particularly the montage of Rod’s speech to his crew at the ice rink. The quality jokes are few and far between, sadly, making “Hot Rod” almost entirely a waste of time.