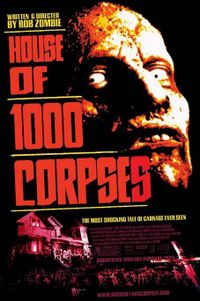 I’ll give Rob Zombie credit; we both have the same taste in movies. Heavy metal artist and notorious horror movie fanatic; this would be Zombie’s first foray into directing a horror film of his own. Surprisingly, for a guy just getting started in the film industry, House of 1000 Corpses is remarkably well made with a grotesquely unique presentation.

In the early 1970’s, four curious teenagers on a road trip across the back roads of America (this won’t end well) happen across Captain Spaulding’s Fried Chicken and Gasoline. The disgruntled clown who owns the place, Captain Spaulding, treats them to a “Murder Ride”, showcasing history’s most notorious serial killers and cannibals. At the climax of the ride, Spaulding tells them the tale of a madman known as “Dr. Satan”. After performing much unnecessary surgery on insane asylum patients, Dr. Satan was lynched and left dangling from a tree. The next morning, however, his body was missing. The 4 teenagers become determined to see the mysterious hanging tree and learn more about the Dr. Satan legend, but after a “blow-out”, find themselves stranded at the rural home of Mother Firefly (Karen Black) and her twisted family. It’s Halloween Eve and the family, including the obnoxious yet smoking hot Baby (Sheri Moon Zombie), the deformed gargantuan Tiny, the loud-mouthed Grandpa, and the psycho philosopher, Otis (Bill Mosley), are ready to celebrate. The teenagers find themselves at the family’s mercy, gradually being tortured to death.

Usually when I hear any complaints about this movie, people groan that it’s “too Mtv”. I suppose the “Mtv” remark stems from Rob Zombie’s roots as a musician, which I think is no way to judge a movie, but in fairness, the film does have a “music video” quality to it. The film is extremely surreal, with scenes constantly interspersed with quick segments of the bizarre variety, featuring the characters giving commentary on torture, or weird stuff like a woman confessing she was raped by a gorilla. After things get rolling the movie rarely has a single “cut and dry” moment of “normal” filmmaking. Whether it be lightning, scenery, camera work, music or rapid cuts, the movie does its best to throw you off balance like an Alice in Wonderland.

The members of the family are, for the most part, pretty memorable. You can draw your own comparisons to the members of the Sawyer family in the Texas Chainsaw Massacre, so I won’t burden you with mine. Baby sticks out the most prominently, with her trademark laugh shrieking at a consistent pace throughout the film. Otis has to be my favorite member of the family, as Bill Mosley does an incredible job with that nutcase of a character. Tiny is a bit too much of an homage to Leatherface in a movie that’s already too much like “a certain film”. Grandpa is crass but rather forgettable. As I recall, he was going to be given a much larger role in the original script of the film but had his part cut short. Then there’s Mother Firefly, portrayed by Karen Black, who is no stranger to cult horror films, having starred in Trilogy of Terror back in the day.

This is one of my favorite horror films to come out in recent years. The pace is fast and furious, the presentation is as bizarre and surreal as can be and the content is as disturbing and ruthless as an R-rating can allow. There are people who hate the “Mtv” style of the film, but I have to say, that’s what separates this movie from so many others and gives it its own unique fingerprint. Without the insane camera work, lighting and random cuts the movie just wouldn’t be that special.