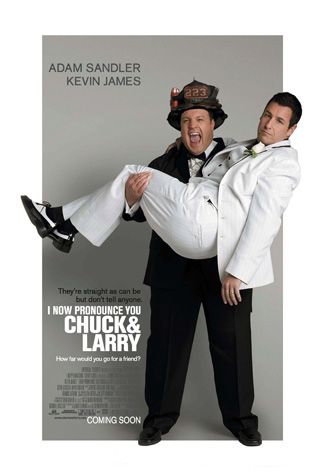 Gay humor tends to be some of the most uninspired and predictable dreck you’ll come across in comedies. Now, I’m all for everybody being made fun of equally no matter who they are (homosexuals should be no safer from jokes at their expense than heterosexuals and vice versa), but gay humor typically applies no more effort than “look, those two guys are kissing! Ewwwww!” “Chuck & Larry” takes the easy way out by trying to make the audience feel uncomfortable and awkward, misconstruing that response with “humor” instead of attempting to approach anything even remotely close to a clever script.

Brooklyn firefighters, Chuck (Adam Sandler) and Larry (Kevin James), are the closest of friends, though they couldn’t be more different. Chuck is a ladies man who can’t go to bed with the same girl twice while Larry is a single dad struggling to raise his two kids on his own. Larry is shocked when he discovers that upon his death, his pension won’t be signed over to his children and they will be left penny-less. After a near-death experience on the job causes Larry to realize how likely that possible future for his kids could be, he does some research only to discover that the only way his kids could be taken care of after his death is if he marries someone he can trust and names him-or-her beneficiary. However, the only person he can trust is Chuck…and Chuck owes him one. No sooner do they get their domestic partnership do they discover the county of New York doesn’t buy their love for a minute. They then find themselves under the watchful eye of the law: if they don’t act gay all the time they could both wind up in prison.

“Chuck & Larry” is your typical Adam Sandler comedy, though I wouldn’t rank it anywhere close to one of his best. The “ewwww gay people” jokes get old very fast and after a while you figure out that’s all they’ve got. So that aside, the movie is primarily cast-driven and tries to make the weak script work with the talent it has assembled. You’ve got the usual Sandler film regulars, such as Steve Buscemi and Rob Schneider, though they also aren’t at their best. Schneider is particularly unconvincing as an Asian priest at an economy chapel in Canada. Some other familiar faces show up, including Ving Rhames and Dan Aykroyd. Aykroyd sliding down the pole in a firehouse invoked within me some vague “Ghostbusters” nostalgia, but no matter how much I like the man, he didn’t stand out particularly well, either.

This is far from the worst comedy I’ve seen all year, but it remains a considerable let-down. Brainless Adam Sandler films are occasionally a guilty pleasure of mine and I’ve watched “Happy Gilmore” more times than I’d care to admit, but “Chuck & Larry” doesn’t display even a fraction of the effort you usually find in his movies. You’re better off letting this one pass you by.