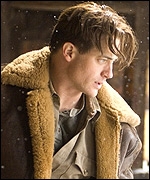 The third installment of the Mummy franchise is currently in the middle of production. This new Mummy will have a decidedly different tone as it will veer away from the Egyptian mummies (they are so two sequels ago) and plunge headlong into Chinese folklore with a royal Chinese mummy this time.

Brendan Fraser reprises his role as the debonair, swashbuckling Rick O’Connell and Jet Li will play the role of the Emperor. Maria Bello, on the other hand, is rumored to play the role of Rachel Weisz – or rather her role in the movie. I have no beef with Bello but if you can’t get the stunning Rachel Weisz at least get another English actress to play her part.