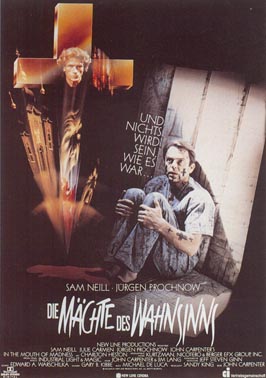 When people are asked what their favorite John Carpenter film is, typically, they’ll respond with the usual “Halloween”, “Escape from New York”, “The Thing”, “Christine”, “The Fog” or other classic Carpenter films. However, while it’s a tough choice due to the filmmaker’s magnificent career, my response will always rest on “In the Mouth of Madness”.

A freelance insurance investigator (Sam Neil) is hired by a publishing company to track down their star author, Sutter Cane. Sutter Cane is the man behind a best-selling series of reality-bending horror novels. However, while writing his latest novel which the publisher has already paid him for, titled “In the Mouth of Madness”, Sutter Cane up and vanishes. Sam Neil heads out to track him down and eventually traces his whereabouts to a secluded New England town. The moment he arrives, a series of bizarre and grotesque events begin to proceed. Creatures from beyond are leaking into our world and gradually overtaking the town. Sam Neil attempts to escape but finds himself trapped in a world of insanity.

As you might gather from the description, this film is a tribute to H.P. Lovecraft, author of the Cthulhu Mythos. The setting of a sleepy, ominous New England town as well as the surreal creatures from beyond our reality seeping through a crack between worlds are all trademarks of Lovecraftian horror. There are very, very few films which can effectively capture the mind-warping vastness of this style of horror, as it consistently features events and creatures which the human mind simply cannot perceive (“The Colour out of Space” being a prime example of a 100% un-filmable story). Most movies which try (“The Dunwich Horror”, “Necronomicon”) are miserable failures. However, John Carpenter does the virtually impossible and makes a film based on aspects of Lovecraftian horror and does a completely marvelous job.

Carpenter’s films are always on the “weird” side, what with his trademark sounds and use of eerie lighting to get so much terror across to the audience. The lighting in this film is brilliant, particularly during the driving scenes, and is his best use of that technical aspect outside of the original Halloween. The horror, as one would expect, is very surreal. You practically never get a straight look at the monsters, but you *know* that they’re there. What you do see of them, though, is simply terrifying. There are moments where characters get trapped in loops as reality bends itself, or moments where strange things happen that just aren’t physically possible.

The acting is great, as Sam Neil does a fantastic job in the lead role. Sutter Cane, played by Jurgen Prochnow, is also impressive in the role of the strange villain. It’s great that they cast a rather unknown actor for the part, as it contributes to the character’s mysterious quality. Also look for a bit part from one of my all-time favorite character actors, David Warner (“Waxwork”).

This might very well be my favorite horror movie, or at least within my top 5. It’s certainly the best H.P. Lovecraft-inspired film ever made and one of the best chapters in John Carpenter’s career. I can’t recommend this movie enough.