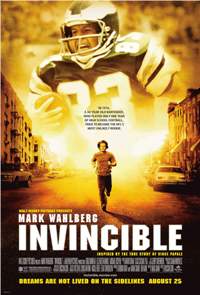 I’ve never been a big fan of the “Inspirational Based-on-a-True-Story Sports Dramas”, honestly. They’re usually pretty formulaic from beginning to end, and Invincible is no exception to the rule. Still, I’m a guy who writes 99% of his reviews about Slasher flicks, and it’s hard to get more formulaic than that, so I went into this movie doing my best impression of an open mind. And, really, for what it was, Invincible was rather good.

In South Philly, 1976, the Eagles’ new coach, Dick Vermeil (Greg Kinnear), held open team try-outs for anybody who felt they had what it took to be an NFL player. A 30 yeard-old down-on-his-luck bartender with no college football experience, Vince Papale (Mark Wahlberg), attended the try-outs and proved to be the only contender Coach Vermeil would select to go to Eagles training camp. Older and less experienced than all the other players gunning for a spot on the team, Papale would prove to be a valuable asset to the Eagles through shear heart and force of will.

Yeah, it sounds like any other inspirational sports movie, like “the Rookie”, “Miracle” or “Without Limits”, and there honestly isn’t much setting it apart from those aforementioned titles. Yet, considering the genre, there honestly isn’t anything wrong with the movie. If you like football and sports movies then there’s a good chance you’ll enjoy Invincible.

During the “big game” against the Giants at the film’s finale, they pulled a “Without Limits”, having people watch the game on TV in-between cuts of Mark Wahlberg playing on the field. Just like in “Without Limits”, the footage they showed on the television was the actual archived game footage. I’ve always liked that effect and it’s a nice nod of respect to the real athletes the movie was based on. Also, Greg Kinnear played a spot-on Dick Vermeil. It’s almost scary how much he resembles the man both in appearance and presence.

So Invincible was formulaic and predictable, yet that’s what you expect from these sorts of movies and it delivered everything it advertised. Can’t say it really went wrong anywhere. It gets a B-. It’s not my kind of movie but I’m sure the people within its target audience will enjoy it.