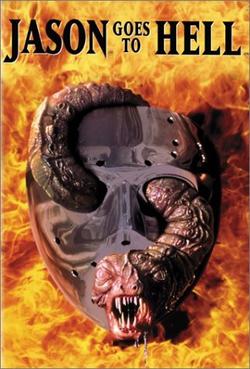 Not the first film in the Friday the 13th franchise to incorrectly advertise itself as the “final” installment (see “Friday the 13th: the Final Chapter”), but it is one of the least popular. Jason Goes to Hell featured the return of Sean S. Cunningham, director of the original Friday the 13th. That may sound like a good idea at first, but Cunningham had some very…”different” plans for the character of Jason Voorhees.

After a daring FBI sting operation, the hockey-masked slasher, Jason, is blown to smithereens and pronounced “dead”. However, in reality, Jason’s reign of terror is far from over. Jason’s evil is so intensely powerful he is able to survive death by possessing the bodies of the living for a limited time by forcing them to ingest his heart. Jason works his way back to Crystal Lake to find his half-sister, for only by possessing a blood relative can Jason regain his original body. The only thing standing in Jason’s way is a bounty hunter named Creighton Duke and the boyfriend of Jason’s niece who is desperate to save his infant son (a blood relative of Jason’s) from the killer.

As you can tell by that synopsis, Jason Goes to Hell is very different from every Friday the 13th film before, almost to the point of being unrecognizable as a part of the franchise. Jason Goes to Hell also marks the beginning of the “New Line Series” of the franchise, as this was the first film to be produced by New Line Cinema rather than Paramount Pictures. So, of course, all these changes lead to quite an uproar from the Friday the 13th fandom, with a large number of fans still hating the film after over a decade.

One of the reasons Sean S. Cunningham made so many drastic changes to the character of Jason is that he never liked the direction Steve Miner took the franchise in with Friday the 13th part II. People recognize the Friday the 13th franchise for Jason Voorhees; Steve Miner’s Jason Voorhees. This never sat well with Cunningham, and as a result, the hockey-masked Jason as we recognize him is only featured in the film for a handful of minutes (supposedly, Cunningham didn’t want him in there at all).

There are two versions of the film, the theatrical cut and the unrated version. The only halfway watchable version is the unrated cut, as the theatrical cut removes a large amount of gore and even a few kills entirely. The kills in this film are still “Jason-style”, even if Jason is walking around inside the body of a big fat black guy. One of my favorites has Jason slamming the heads of two police officers together and squishing both their noggins into one.

My only major complaint in regards to the movie, even ignoring the fact that the traditional Jason is absent from the movie, is that it screws with the origins of both Jason and Pamela. It turns Pamela Voorhees into a “witch” of sorts (spellbooks, including the Necronomicon from Evil Dead II can be seen inside the Voorhees house) and the whole bit at the end where Jason transforms into the demonic “Hellbaby” is just embarrassing.

On the bright side, the film has a kickass cliffhanger ending which only took eleven years to get resolved.

While Jason Goes to Hell is a breath of fresh air in many ways, it disrespects the previous installments far too much to be worthy of any praise. And while there are many good kills, most of them are rather generic.