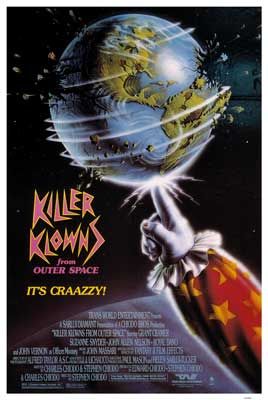 If the title didn’t get this point across to you, then I’m going to make it perfectly clear: you *have* to have a sense of humor if you want any hope of enjoying this movie. The film is blatantly tongue-in-cheek with acting only half a notch above that of a Troma film. Is it very scary? Maybe if you’re psychologically terrified of clowns, but otherwise, no, not really. It’s much too funny to be scary.

A bunch of college kids (honestly, do their names really matter?) are having some fun at the local make-out point when a shooting star passes by and lands in the near by woods. A pair go to check things out and discover a circus tent in the middle of nowhere. However, it’s no ordinary circus tent. A horde of bizarre Klowns come crawling out from within, using lasers to turn people into cotton candy cocoons. The kids attempt to warn the townsfolk of the impending danger, but as you can probably deduce, no one believes them. Which sucks for everyone in town, as the Klowns quickly invade and start transforming everybody into delicious treats.

There isn’t really much of a plot involved with this film outside of “evil Klowns eat people”. It’s basically one clown-related gag after another, stringed-along by a few regular horror film stereotypes filling in the gaps. And really, all you *want* to see out of this film is Klowns brutalizing people using various circus methods. And you get plenty of that. I’m particularly fond of the “imaginary car” bit and the man-eating shadow puppets. However, easily the best moment in the film, and possibly the closest this flick gets to “scary”, is when one of the Klowns transforms the corpse of a police officer into a ventriloquist dummy. An excellent moment of genuine horror in a movie that’s 90% dark comedy.

The Klowns are the real draw of the film, as they’re all pretty nasty-looking. You’ll pull your hair out at how stupid the cast of human beings in this film are. I mean, if you heard strange, unearthly noises coming from within a dumpster would *you* stick your head inside to investigate? I should hope not. There are a lot of stupid gags in this movie accentuated by a cast of annoying irritants, so really all you’re going to get here is the Klown violence. For the most part, it’s pretty creative. They use popcorn as seeds for little piranha Klown monsters, crazy-straws to suck the blood out of the cotton candy cocoons or balloon animals to sniff-out prey. It’s all pretty entertaining.

The production values range from “pretty good” to “was this filmed in a parking lot?” The costumes and set designs are wonderfully cheesy, and the part with the giant “King Klown” at the end is actually rather well done. However, most of the finale within the Klown’s spaceship has blatantly been filmed within a warehouse or a parking lot. I swear, I can see the parking space lines on the concrete if I look hard-enough.

If you can stomach B-movies that are self-aware that they’re B-movies, then you’ll probably get a kick out of Killer Klowns from Outer Space. If you’re looking for something scary and, well, *good*…then you’ve come to the wrong place.