Summer and Christmas are my two favorite times of year as far as movies are concerned. Summer gives us highly intelligent, heart-warming movies such as Independence Day and Godzilla. Christmas gives us morally appealling, family friendly movies such as Die Hard and Die Hard 2. It should be no surprise, then, that I found King Kong to be just the type of movie for this holiday season.

Please read the following plot preview to establish your decision to watch this movie: a giant friggin’ ape that’s AT LEAST 3 stories tall beats the crap out of not one, but FOUR T-Rexes! FOUR! Holy sh*t, he rips this one dinosaur’s jaw open and BITES OUT HIS TONGUE and then plays with him! And there’s this hot babe who doesn’t say much and this guy with the BIGGEST FRIGGIN’ NOSE IN THE UNIVERSE. Then he (Kong) bites off some guy’s head. WOW. If you don’t watch this movie, people will probably pick on you. 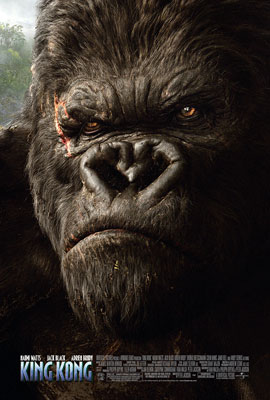 If you are still clueless, read on.

King Kong trumps its 1937 predecessor in every way. Unless you are a die hard fan of clay apes fighting clay dinosaurs, it is a no-brainer that this movie has made the great artistic leap forward. And whereas the original film had to remind us that there was, perhaps, a moral to the story, Peter Jackson’s monkey-film constatnly holds a sign up to our face in case we are too stupid to see the theme of beauty & the beast. I do prefer, however, the original special effect of throwing screaming rag dolls into a ravine over the new, computer-generated version. But I digress.

The movie is a visual masterpiece, painting Skull Island and 1930’s New York with overly romanticized digial brushstrokes. The only things on screen that you know to be real are the actors: everything has been given so much visual cohesiveness that the environment seems too fluid to be true. And Kong? Kong looks incredible. Many reviewers have said that he is the greatest cinematic creation to date, which is a fare opinion. You can see his nose hairs and maybe even some dingleberries. He moves and acts like an ape. He even laughs! Once you see him, you forget about that guy with the big nose or the fat guy who keeps wanting to make a movie. Ann Darrow (Naomi Watts) is so impressed that she never speaks for the rest of the movie. Needless to say (if you weren’t impressed by the trailer, even the words of a ninja won’t convince you), it is a beautiful film.

But it is a long beautiful film. Like the Lord of the Rings trilogy, I am of the opinion that Peter Jackson is the type of cinematic orator who sticks to the rule of quantity versus quality: he takes his sweet time in telling his monkey story and establishing who his characters are in the first act. This is problematic for those of us inclined to A.D.D: by the time Kong appears towards the middle of the second act, the characters are stunted in their development and some (Ann Darrow) are literally never heard from again. Why take the time to establish a romance that steps to the side the moment the big gorilla starts chokeslamming V-Rexes? Why establish the character of the jerk film director if nothing happens to him at the end? The first act may make one weary of what follows next, but those who stay in their seats will not be disappointed. Kong and Ann tangibly bond in the mutual relationship of “protector against nasty dinosaurs” and “lovable person who makes me laugh, not like those other hot blondes I just decided to eat.” It is a relationship that is based on debt: Ann owes Kong her life, whereas Kong owes Ann the primal honor of being the only creature to establish a bond of some sort with him. Even his roomates (giant 15-foot bats) pick on him. There is no half-baked attempt at a plot or theme here, which makes the last spoken lines of the movie rather redundant. The movie is fortunate to have a director who balances his hours of exposition with a great deal of visceral quality.

If the movie is to fail anywhere, it has to be in the sheer beauty of the world that Jackson has created. Everything that occurs in the movie, even in the midst of chaos, is absolutely gorgeous. Andy Serkis gives Kong the movements of a real gorilla’s mannerisms, but all this is lost in the perfect, flowing, individual strands of Kong’s hair and the beautiful hues of Skull Island’s setting sun. It’s a GAP commercial with a giant monkey and a flapper girl. I cannot give King Kong the honor of being the greatest cinematic creation to date simply because he does not enter into our world in the tangible fashion that, say, Jaws did. Peter Jackson’s King Kong exists in a world of the 1930’s that is, at most, tangential to ours but nevertheless trapped in the realm of Hollywood fiction. It is a pretty painting in a perfect frame that we are welcome to gaze at for almost 3 hours. That’s not too bad, especially when dinosaurs start getting demolished.