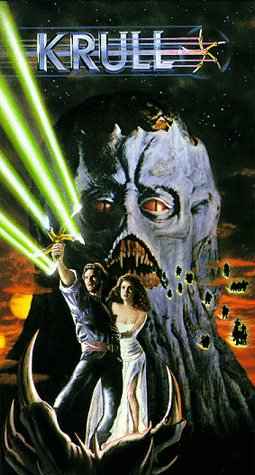 What can be said about Krull that hasn’t been said already? Probably a lot, actually. Krull isn’t a terrible “action adventure fantasy epic”, it’s better than “Yor, Hunter of the Future”, at any rate. But, well, it’s really, really cheesy. For the most part, the movie tries to take itself seriously, but the goofy-looking 1983-era special effects result in a lot of unintended laughter. But I’m getting ahead of myself, here.

On the planet of Krull, an intergalactic conqueror known as the Beast and his army of Slayers have arrived and taken Prince Colwyn’s bride, Lyssa, captive. With the direction of the wise-man, Ynyr, Colwyn sets out on an epic quest to save her from the Beast’s wicked clutches. Along the way he is joined by Ergo, the shape-changer, Rell, the stoic Cyclops, and a band of ruthless prison-escapees. During his journey he takes possession of the Glaive, a flying razor-tipped starfish-thingy. Colwyn is quickly encumbered by a massive set-back, though: every day, the Beast’s fortress disappears at sundown and reappears at sunrise in a completely different location. How will Colwyn and his band of adventurers reach the fortress before it vanishes? Fire-Mares can travel 8 leagues in a day!

Krull has an entertaining plot, though it is extremely derivative at times (Dashing Prince must rescue Princess from dark and gloomy castle…yeah). Krull gets by mostly for its rather creative concepts, like the vanishing temple. The special effects were something back in 1983, I’m sure, but today they just haven’t aged very gracefully. Many of the costumes look unbelievably ridiculous, particularly the Slayers and Rell, the Cyclops. They just look rubbery and fake. The Glaive’s flying effects are also rather humorous-looking in execution.

And there-in lies what makes Krull such a cheesy movie, the hackneyed fantasy clichés coupled with some very goofy-looking special effects. Still, not all the effects are bad. The Beast is rather cool, though obviously projected on a bluescreen. Ergo’s morphing effects hold-up alright, and he’s probably the most genuinely-funny part of the movie and one of the more entertaining characters.

Krull is a good kid’s movie, and nice in the nostalgia department, but at the end of the day it’s still a B-movie. A B-movie that gets a C+, no less. Also, it should be noted, that one of the escaped prisoners looks just like Super Mario.