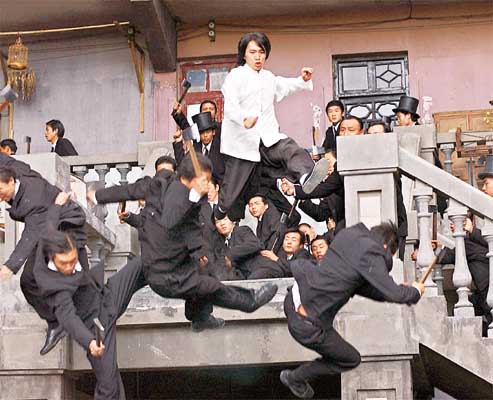 During the mid to late 90’s the Hong Kong movie industry actually died. Because of the stiff competition from Hollywood movies and a general dip in the level of quality in domestic film releases, Hong Kong natives opted to just spend their entertainment money on Hollywood fare or other pursuits. The decline of the Hong Kong film industry, as well as the film industries in other countries in Asia is a big blow both economically and artistically. It becomes harder to really look for good quality local films because the negative perception that a locally made and produced movie will pale in comparison to the slick product that is a Hollywood movie is a hard one to shake off.

It’s a good thing that despite the uphill battle Hong Kong talent is not being wasted. Directors like Johnnie To and Wong Kar Wai are keeping the torch alive for Hong Kong film. You can also count Hong Kong’s superstar Stephen Chow as one of its vanguards.

Chow is probably one of the most consistently popular actors in Hong Kong and he also holds the distinction for starring and basically being the creative force for two of the country’s all time top grossing films – Shaolin Soccer and Kung Fu Hustle. Heck, even Quentin Tarantino is an avowed Stephen Chow fan.

Stephen Chow’s Kung Fu Hustle may be the pinnacle of Chow’s unique vision. Prior to Shaolin Soccer, he painstakingly developed his unique brand of comedy – one that is very visual without resorting to old school slapstick. The visual gags could be very subtle (the parked car and lamp post in Magnificent Scoundrels) or over the top (the transvestite with a beard that is a staple of most Chow movies). Chow’s genius is in pacing. He knows how to put together scenes to maximum effect. With Shaolin Soccer he perfected his visual trademarks, borrowing heavily from anime and wuxia. Kung Fu Hustle may yet be the best combination of his comedy and his directorial vision.

Kung Fu Hustle tells the story of Sing, a down on his luck guy who tries his best to become a toughie in order to enter the Axe Gang. Trouble ensues when he gets inside a slum where hidden kung fu experts reside and confrontations escalate with alarming intensity culminating with Sing being ordered to release the notorious killer The Beast to defeat the slum’s resident kung fu masters. The goodness of Sing’s heart prevails and in the ensuing battle his “chi” is released and he realizes his potential as a true kung fu genius.

The story is quite simple and the conflicts are so comicbook simple it will not be hard to follow the story. What makes Kung Fu Hustle shine though is how the story complements the visual spectacle that Chow regals the audience with. He peppers the movie with many set pieces — both action and comedy. Yuen Wo Ping again shows why he is the uncontested master of fight choreographies (he also makes a cameo as the beggar). The wushu-like complexity and intricacy of the fight sequences are a sight to behold. It may look awesome but it is also more understated than the over the top fight sequences in wuxia films like Crouching Tiger, Hidden Dragon. Oh, and forget the burly man brawl in Matrix Reloaded. Chow’s fight sequence with the Axe Gang puts that CGI disappointment to shame. Speaking of CGI, Chow freely uses digital effects here, in fact, he uses them to almost unnecessary levels. If not for the fact that most of the scenes with CGI actually work in the whole context of the movie I would have groaned already. One thing that Chow proves though, Hollywood does not have the monopoly in creating visually spectacular movies anymore. Asian movies can fight neck to neck with anything that the big Hollywood studios can churn out.

Kung Fu Hustle is a wonderful action comedy film that does not scrimp on both laughs and action. Movie fans who are not familiar with Stephen Chow’s work can use this as a jump off point for delving deeper into Chow’s very entertaining body of work.