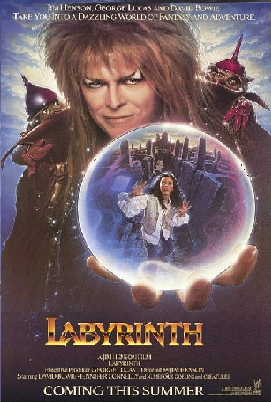 I’ve seen a lot of fantasy films in my life time, but nothing quite stirs the imagination as well as a good Jim Henson film. And of all of Henson’s magnificent movies, Labyrinth tops my own personal charts. This film truly feels like a fairy tale brought to life, with endless creativity and a scope which goes beyond limits.

Sarah (Jennifer Conelly) is a spoiled rotton teenage girl who loves fairy tales. One night, her parents ask her to stay and watch her baby brother, Toby, while they go out. Sarah throws a fit, frustrated that she has to spend her free time looking over her brother. In anger, she recites words from one of her favorite fairy tales, and wishes the Goblin King would come and take her brother away. The Goblin King, Jareth (David Bowie!), does indeed arrive and spirits little Toby away to his dark castle just beyond the Goblin Cities. Sarah immediately regrets her wish and begs Jareth to return her brother. The Goblin King gives her a sporting chance and tells her that if she can solve his labyrinth in 13 hours, she may have her brother back. However, his labyrinth is virtually without end, constantly fluctuating in structure with traps around every turn. Along the way, Sarah is befriended by Ludo, the rock-commanding behemoth, Sir Didymus, the diminutive rat-knight, and Hoggle, a dwarf who is secretly a spy for the Goblin King.

At its heart, Labyrinth is a tale about growing up, leaving behind childish things (but not forgetting about them) and accepting responsibilities as they come. Sarah begins the film as a selfish brat who won’t let go of her childhood and accept her role as a young lady. Her adventure to rescue her little brother and all the hardships she endures along the way teach her about what’s really important in life. However, she also learns that growing up doesn’t necessarily mean forgetting the things that made you happy as a child; it just means you have different priorities. Trust me, they get the message across without sounding *nearly* as trite.

The real treat in this film are the visuals: its non-stop Muppet eye-candy from beginning to end. I continue to marvel at the creativity within this film, especially considering the limitations of 1986 special effects technology. Honestly, I’ll take Muppets over CGI any day. There are numerous effects scenes that make me joyous, but easily my favorite is the scene with “the Helping Hands”, which feature probably the least extravagant special effects in the film. Such a simple concept, but only Henson could make it so awesome. Sarah becomes trapped in a pit with dozens of hands bursting out of the walls, grabbing at her. The hands come together, using their fingers in conjunction with one another to make “faces” and speak to her in haunting, echoing voices. It’s really awesome and really creepy all at once.

Speaking of “creepy”, this movie can get pretty dark when it wants to. There are lots of monsters lurking around every corner, environments coming to life and screaming at the characters and plenty of dark, dank, dungeonous chambers. Yet, Henson always off-sets the dark atmosphere with plenty of humor to keep things from getting too scary. I know this movie tends to frighten the crap out of some of the younger set.

Then there’s David Bowie. David freakin’ Bowie. As dated as it may seem, Bowie is really pretty cool as the Goblin King. He gets a fair amount of musical numbers, and even if you don’t like Bowie’s music, your kids will dig the upbeat, memorable songs. There are some non-Bowie songs in the film, most notably the insane sequence involving the Fireys. The Fireys, while singing, rip off their arms, legs, heads, gouge out their own eyeballs, eat them, burn them and do a whole number of freaky, unsavory masochistic things to themselves all while dancing around a bonfire in the middle of a swamp. This movie can get down-right demonic, some times. Of course, it ends with the Fireys trying to decapitate Sarah because they think it’d be funny. God bless em.

I suppose the only real drawback to the film is Jennifer Connelly’s stiff acting. She improves depending on the circumstances of the film; her cry-baby fits are difficult to sit through while her acts of heroism are occasionally charming. She doesn’t ruin the movie by any means, but she doesn’t deliver a performance befitting a lead character.

I’d recommend Labyrinth to practically anyone, children or adult. It’s gorgeous in its effects, touching in its story and all-around timeless.