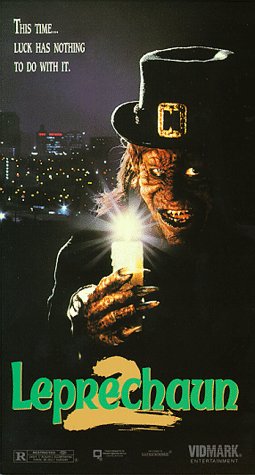 Can you believe they’ve actually made six of these things? Now, I’m not normally one to condemn a bad horror movie. I *love* bad horror movies. But the Leprechaun franchise is just…SO bad, even I can’t defend it. I will admit, it is a guilty pleasure from time to time. I like Warwick Davis as the Leprechaun, it’s just everything else I can’t stand. However, of the 6 (so far) Leprechaun films, the second one is probably my “favorite”, and by that I mean it’s the one I hate the least.

A Leprechaun is only allowed to take a mortal wife on its thousandth birthday. A thousand years ago, the Leprechaun was thwarted from taking a lass by her father and vowed to take her fairest ancestor on his next thousandth birthday. Well, fast-forward to the present: it’s St. Patrick’s Day and the Leprechaun has is heart set on a wedding. He comes to take his bride, but in the process, accidentally leaves behind one of his precious gold coins in the possession of her boyfriend. Before he can enjoy his wedding night, the Leprechaun must first retrieve his missing coin. However, all the boyfriend wants is his girl back. Lots of limericks and Irish jigs follow.

I’ll give the Leprechaun franchise credit for one thing: it has zero continuity. Every Leprechaun film stars a different Leprechaun which just so happens to look, act and talk exactly like the previous one. It keeps the franchise kind of “refreshing” in a way, as the writers don’t have to worry about bringing the Leprechaun back to life at the beginning of each film or play by any of the established rules. You’d think that kind of creative freedom would lead to some interesting films, but no, it really doesn’t. Future installmanets will feature the Leprechaun killing teenagers in space or slaughtering black people in “tha hood” (he does this twice).

Anyhow, there’s plenty of Irish-themed kills in this picture, such as a man having a pot of gold materialize in his belly, a guy being duped into making out with the blades of a lawnmower or a security guard getting run over by a go-cart. Actually, now that I think about it, most of these kills weren’t very Irish-themed at all. The gore is surprisingly tame, considering the violence of the kills, with the camera often panning away from the money shot and only allowing brief glimpses at the aftermath. A bit disappointing.

The story is pretty stupid, with the plot rotating between the Leprechaun trying to get his gold back and trying to rape his bride-to-be. Yet, it’s far more tolerable than Leprechaun in Space. Warwick Davis delivers his usual fun performance as the Leprechaun and that’s really this franchise’s one saving grace. But even then, his antics can get annoying pretty quick.

Leprechaun 2 gets an F+. The “+” is present only because it’s my “favorite” of the series.