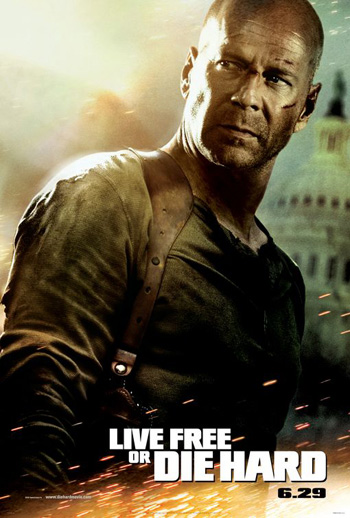 We’ve recently been enjoying a Renaissance of classic action film franchises, as several retired icons have been hobbling out of the proverbial woodwork to thrill us one last time. Arnold managed it with “Terminator 3”, Stallone proved he still had what it took with “Rocky Balboa”, and last but not least the final member of the Planet Hollywood triumvirate has polished up his classic chromedome for another bout of Silver Screen super action, Bruce Willis returns for “Live Free of Die Hard”. And just like those other old fogies, Willis proves that John McClane can still kick your ass even when pushing 60.

Thomas Gabriel (Timothy Olyphant) is a spurned Government official-turned-terrorist who has been hiring talented hackers to program a “firesale” virus with which he shall completely disable America and make a tidy profit in the process. Grizzled NYPD cop, John McClane (Willis), is assigned to protect Matt Farrell (Justin Long), a hyperactive hacker whom Gabriel wants put out of commission before he can share everything he knows. Gabriel unleashes the hounds upon Farrell and McClane, and when that doesn’t work, he makes things personal and kidnaps McClane’s daughter (Mary Elizabeth Winstead), Lucy.

I remember hearing the first complaint from the “Die Hard” fandom when the trailers hit theaters: “PG-13? Aw maaaaaaaaaan.” Well, let me assure you, “Live Free or Die Hard” is no “Die Hard in Name Only”. Even with what would seem to be a crutch rating, this fourth installment is just as violent, insane, over-the-top and all-around “Die Hard”y as its predecessors. I actually left the theater liking it more than “Die Hard with a Vengeance”, PG-13 rating and all.

The action sequences in this movie are the sort of batshit crazy maelstroms you’d expect from a franchise like “Die Hard”. If this were any other film, the outrageous action sequences might seem too ridiculous even for the suspension-of-disbelief of today’s audience. But with an established film icon like John McClane, a guy killing a copter with a sedan or driving a truck through a building just seems natural. The action in this installment trumps everything from its older siblings and goes right for the throat; it’s the kind of crazy stuff you have to see on the big screen to fully appreciate.

I think what makes John McClane so endearing as a hero is that he’s the sort of “Every Man” archetype. He’s not a gargantuan hulking brute like Arnold, nor is he has imposingly built as Stallone. He could pass for an average human being and that’s why he works so much as your standard NYPD cop/hardboiled action hero. Sure, he executes some ridiculously impossible kills and acts of general brutality, but he does it with a sort of “Average Joe” enthusiasm. When he blows up a room full of badguys he doesn’t put on a pair of sunglasses and stoically walk away into the night like some kind of James Bond-wannabe. No, he grabs his ribs, hobbles to a comfortable place and lets out a well-earned chortle at the expense of the villains he just wasted. He’s not so fictional that he can’t revel in his own victories. That’s what makes McClane so loveable and why he’ll always be Willis’ most recognized and appreciated character.

But if “Die Hard with a Vengeance” proved anything, it’s that McClane is best served with a side of Wacky Sidekick. This time around, he gets saddled with the youthful protagonist Matt Farrell. One of the themes of “Live Free or Die Hard” is the idea that yesterday’s action heroes are far from outdated, and while they may not be as hip and with it as those “Matrix” guys, they’re far from obsolete. Farrell provides the modern Information Age sensibilities to compliment McClane’s less complex “point and shoot” method of saving the day. The plot of this installment revolves around computer technology and its ability to track and control everything short of the rocks in your backyard, making Farrell’s presence entirely necessary. While one could boil down Justin Long’s performance as “comedy relief”, he provides much more to the plot than a Jar-Jar Binks token buffoon and endears himself to the audience very quickly.

Thomas Gabriel is a different kind of badguy than what we’re used to in the “Die Hard” franchise. By that, I mean, he’s not a raging European terrorist stereotype (though I love them, too). Sure, he’s in it for the money, but there’s more to him than that. He has a point to prove to the American Government and the American people, and while his methods are sinister and chaotic, he genuinely believes he’s going to make America a better place. I won’t rank him among the most developed or memorable cinema villains in history, but he’s far from a two-dimensional Snidely Whiplash. There’s also Lucy McClane, John’s fiery daughter. While she doesn’t get as much screentime as the rest of the cast, she does play a more pivotal role toward the end. The script for this installment is strong-enough to tear a phonebook in half, so even her limited dialogue is witty and fun and keeps her from becoming a damsel in distress but never reduces her to a “girl power!” cliché.

“Live Free or Die Hard” lives up to the high standard one would expect from any film bearing the “Die Hard” name and has immediately risen to the rank of second-best in my eyes (sorry, but that first one just cannot be topped). You’d be doing yourself a serious disservice by skipping it.

For another look at the film, check out Michael’s review at our sibling site Forever Geek.