If you have seen the trailer for Lord of War, you have a pretty fair indicator on what to expect from Andrew Nicol’s latest. The movie is evenly split down the middle as an exploration of one man’s morality and an amusing, almost educational look at the history of warfare within the last twenty years. There are also three and a half pairs of boobs. 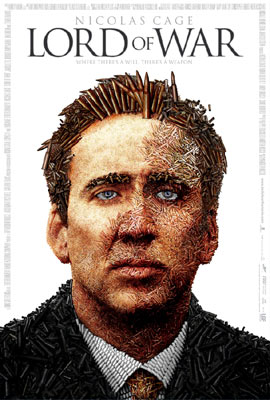 Nicholas Cage is Yuri Orlov, an immigrant from the old country whose family pretends to be Jewish in the Breighton Beach area of Jersey to avoid persecution from the Russian mob. Bored with his rather mundane life, Orlov reaches an epiphany after witnessing a gunfight between a mob boss and his would-be assassins: just as restaurants exist based on the principle that all people will have to eat, gunrunners live by the principle that there will always be war. Orlov and his brother Vitaly (Jared Leto) fly to the Berlin Arms Fair in 1983 and begin their business of blood.

The film is masterfully crafted with amazing visuals and scenic locales. Told almost entirely through narration, the viewer is guided by the hand through Yuri’s world and through the rise and fall of the Cold War from a gun trafficker’s perspective. Because the story is admittedly “seen” through Yuri’s eyes, this allows for frequent yet subtle comedic moments such as a slow-motion shot of an AK-47 being fired, every discharged casing echoing the ring of a cash register. Jared Leto is endearing in a sleazy sort of way as the good-for-nothing brother who is kicked out of the business early on for developing a nose-candy habit (he loves it so much, he even drew a map of the Ukraine in cocaine). And Bridget Moynahan greatly accentuates the moral aspect of the tale as Yuri’s beautiful wife who feels that she has never done anything worthwhile as a human except for being born beautiful but resolves to succeed at being human.

Yuri is a brilliant liar and businessman. Both are seen in this film to be essential to be a successful gunrunner. The morality of Yuri is never excused as he proceeds to also engage in coke-use and admittedly cheat on his wife at every possible moment (except when he may be in danger of getting AIDS in Africa). Unlike tragedies in which a character’s morality is inexorably tied to his line of work or duty, Yuri’s trade and his moral disposition simply run parallel to each other and intersect at all the right (or wrong) points. The film is not necessarily political because it insists on painting war as neverending: no nation is above another in its propagation of war. As such, the film treats gunrunning as a necessary evil and the sell of weapons as just doing business. While some may disagree with this cynical point of view, one should agree that the movie never tries to say that guns are good. Quite the opposite.

Lord of War is an excellently taylored film that, while not being award-worthy material, is nevertheless entertaining and worth its weight in bullets.