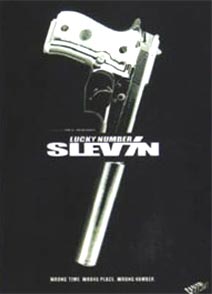 Paul McGuigan’s Lucky Number Slevin flew under the radar. It’s quite a shame considering that it is a well masterminded film on all levels with a “smart” script and an all-star cast that doesn’t let their stardom overshadow their characters. It also lets Josh Harnett redeem himself for making that atrocious Pearl Harbor movie (Star Wars: Episode 1941) and allows Bruce Willis to showcase his badassitude in a relatively non-speaking role.

Mr. Goodcat (Bruce Willis) has been flown in by two warring mob bosses (Morgan Freeman and Ben Kingsley) to kill off the man responsible for some of their problems, a man by the name of Nick (Sam Jaeger). Poor Slevin Kelevra (Josh Harnett) just so happens to be in New York loafing in Nick’s flat when Freeman’s henchmen bust in on him post-shower… and so the mistaken identities start to unwind the hijinks to follow. Or are they truly mistaken identities?

The script by Jason Smilovic is very fast paced. Not “fast and stupidly Shakesperean like Gilmore Girls”, but fast in the same vein as the snappy dialogue of a noir or pulp-fiction gangster movie. The characters come with built-in, fast paced repartés and are incapable of freaking out. They’re cookie-cutter cool. It’s supposed to be a script worthy of old gangster movie status but you wouldn’t really know it considering that the environment is modern New York through and through. It doesn’t get tired but it does get annoying at times when you have time to stop and think about how unrealistic it is for people to snap back at mob bosses without fear of getting their junk messed up (though this is also explained away, which sorta makes things peachy).

Visually, the film employs tight angles and limits your field of vision to environments that allow enough space for two characters to converse. It’s incredibly claustrophobic at times, which was a smart move on the director’s part to increase the tension that you probably would not get with an open-air environment. The movie sometimes shifts to flashbacks from the 70’s and is to be commended in creating a believable 70’s atmosphere (especially 70’s Bruce Willis… that was great). The intro credits are also done to fancy visuals of rotating, handwritten numbers on looseleaf paper. This sets the mood that it’s going to be one of THOSE movies. Those smart movies that are pretty good but no one is going to go see.

And the film is quite smart from beginning to end. Yes, there is a twist. Will you see it coming? At some point you will, seeing as how the cast list is too small to allow for any other possibility. But with its smart plot, good choice of actors, and adequate action, Lucky Number Slevin is a safe bet even for the most cautious of move-goers. Well, except for the scenes with Lucy Liu. I can’t stand her or her “sex on the first date” character.

Acting: A
Aesthetics & Entertainment: A-
Storyline: A-
Overall Recommendability: A-

If you walk into Lucky Number Slevin expecting the things the trailers and commercials promised you, then I’m sorry. This movie was advertised incompetently as an explosion-a-minute action-fest with lots of zany humor to fill in the gaps where stuff isn’t blowing up. Lucky Number Slevin is not that at all.

Actually, it has some story and depth and lots of clever dialogue. Imagine that?

So Slevin is a guy who happened to be in the wrong place at the wrong time. While visiting a friend’s house (while the friend was strangely absent), Slevin gets violently kidnapped and carried off to the office building/fortress of underground mob boss…the Boss (Morgan Freeman). Mistaken for his pal, Nick, and with no way to prove his identity, Slevin is charged with paying-off a considerably large gambling debt. The Boss offers him a way to solve the problem; kill the son of his arch-rival, the mob boss called the Rabbi. Slevin reluctantly accepts, and minutes after returning “home”, is kidnapped by the Rabbi and told to pay another absurdly large gambling debt. So Slevin, a seemingly normal guy, has a lot of work to do and only 3 days to do it.

Lucky Number Slevin is very reminiscent of the “old timey” way of making suspense-thrillers. Instead of devoting all the time towards explosions, car chases, gunfights and brawls, it devotes the vast majority of the film toward character development and treats us to a LOT of witty, clever dialogue. If you’re expecting Mission Impossible or The Italian Job then I recommend you look elsewhere.

However, if you’re in the mood for an old fashioned suspense film that feels like something Hitchcock would deliver, with lovable characters and some superb acting; then by all means, please go see this movie. Slevin-himself steals the show, as any title character should, by being immensely fun to watch and listen to. Slevin has a psychological disorder which prevents him from getting mad or losing his temper over *anything*. So no matter how hopelessly the trouble piles up on him, or how painfully he’s treated, he always bounces back with some fantastic dialogue which will keep the audience laughing.

The ending is a twist you may not see coming; drawing together all the numerous clues dropped blatantly and subtly through-out the film. No part of the movie is pointless or filler and everything serves a purpose.

So on “The Relative Grading Scale of Embarrassing Bruce Willis Moments”, a BAD movie would rank as a “Bruno the Kid”, but this was a GOOD movie, so it should rank as a “Hudson Hawk” (though don’t let that fool you into thinking Slevin is of the same quality).

Lucky Number Slevin is living proof that amidst the myriad remakes and uninspired adaptations that Hollywood pukes out on a weekly basis, they still have the capability of supplying the audience with an original, old fashioned, intelligent suspense movie.