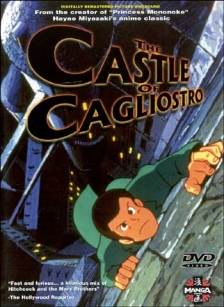 There have been lots of Lupin III the movies, and there have been lots of Hayao Miyazaki movies, but there’s only been one movie where the two flavors have combined to forge a veritable Recess Peanut Buttercup of cinematic flavor. Hayao Miyazaki had had years of experience working on previous Lupin III television shows, so his firm grasp on the characters shines magnificently in this film. However, one does not have to be a Lupin III-fan to enjoy this movie. As a matter of fact, you don’t even need to know who Lupin III is. Castle of Cagliostro is an animated masterpiece one can watch with the entire family (except maybe the really little ones).

Lupin III is the world’s greatest thief. Along with his partner and super marksman, Jigen, the pair travel to the isolated European country of Cagliostro to get to the bottom of a century’s old counterfeiting ring. Things are never so simple when it comes to Lupin, though. The greedy Count of Cagliostro wants Lupin dead so that he won’t interrupt his marriage to the young Princess Clarisse, who is the key to uncovering the country’s ancient treasure. Lupin makes it his mission to uncover the counterfeiting scheme, save the Princess and defeat the Count all at once. Complicating matters, though, is the arrival of Interpol’s Inspector Zenigata, who will stop at nothing to arrest Lupin. Lupin and Jigen have their work cut-out for them, so they get help from the Japanese swordsman, Goemon, and the femme fatale, Fujiko.

The Castle of Cagliostro, like many of Miyazaki’s films, feels like a timeless classic as you watch it. It hits upon numerous “fairy tale” themes, like a noble thief rescuing a beautiful Princess from a dangerous castle, yet in true Lupin III spirit, has a manic pace coupled with lots of crazy humor. Made in 1979, it was one of Miyazaki’s earliest films, and while it doesn’t contain the level of detail and nuance that his future endeavors would be known for, it has a quality to it that seems light-years ahead of its time.

The animation from TMS (Tokyo Movie Shinsha) is very impressive, considering the age of the film, and holds up extremely well to today’s standards. There are maybe one or two noticeable animation errors, but nothing to pull one out of the experience.

The characters are just as important as Miyazaki’s direction in regards to the success of this film. Even if one is not acquainted with the volumes of material and extensive background histories that go with each character, it’s easy to appreciate them all for their individual quirks and special talents. While the bulk of the film is dedicated to Lupin and Clarisse, Miyazaki makes sure to give each classic Lupin character their own time to shine. Goemon might come out the weakest of the bunch, receiving maybe two lines total in the entire movie, but the quiet-approach is true to character and he gets some of the flashiest moves in. Jigen, my personal favorite member of the Lupin crew, is a total riot in this film and participates in some of its best moments.

The Japanese voice track, featuring the late Yamada Yasuo (Lupin) as well as Kobayashi Kiyoshi (Jigen) and Naya Goro (Zenigata), is classic. Each actor has been voicing the characters for decades and little else sounds more natural. The English dub provided on the Manga Video DVD release is actually very good, with voices that lived up to my expectations. While Pioneer has the best English cast for Lupin III (there are numerous different dubbing studios doing the plethora of available Lupin material, which is very annoying), the Manga Video cast take a more serious approach to the characters which fits in with the tone of the film perfectly. While I love the Pioneer cast, they work better with the goofier Lupin material, and this film is anything but a dirty slapstick comedy like other Lupin III movies.

The Castle of Cagliostro is one of my favorite animated films ever, and the best piece of Lupin III animation ever produced. The animation is impressive, the story is timeless, the characters are memorable and the direction is outstanding. While there is some blood and a few curse words, it’s more than suitable for a crowd that can handle PG-rated movies. I’d recommend it for the whole family.