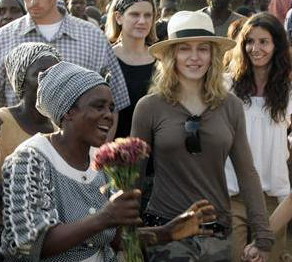 Pop star Madonna was so moved by what she saw in Malawi when she was adopting her son David, that she’s decided to make a documentary about the African country.

Back in October 2006, Madonna visited Malawi for the first time & was inspired to make a movie about the conditions there & about the problems the people face who live there.

The Material Girl’s rep stated that the singer has been hard at work on the film already, saying, “She’s been working on it for a year. Very intense. And profoundly sad–not for the faint of heart. She did an amazing job, I must say.”

I’ll be interested to see what Madonna focuses on in this filmmaking piece.