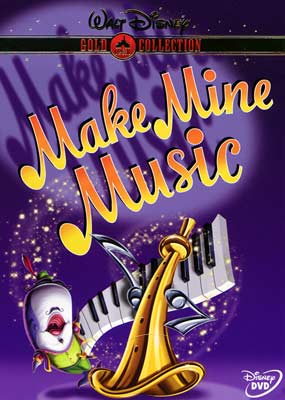 I’m usually a sucker for anthology films of just about any kind, so I rushed to snatch up a copy of this 1946 Disney anthology piece which I had never seen in its entirety. Most people recognize “Make Mine Music” for only about three of its segments, which were cut loose from the film and shown individually on television and in other mediums. Having finally seen the film in its quasi-entirety (more on that later), I have to say, they cut those segments out for a reason. The vast majority of “Make Mine Music” is frightfully boring with only the most famous installments being worth viewing at all.

The film begins with “Blue Bayou”, a lullaby-like piece about the pristine beauty of the bayou which will likely put you to sleep in a heartbeat. Not the best way to start a film and a segment doomed to eternal fast-forwardings. “All the Cats Join in” is a jazz piece featuring Benny Goodman which tries to wake everybody up. The entire segment is very dated as it centers around the “hipcats” of the era and the various things teenagers back in 1946 liked to do. It tries so hard to be “cool”, but like anything that’s “cool”, is destined to be considered “lame” with time. While its jazzy tunes would seem to indicate a new spike upward in speed and energy, “All the Cats Join in” is immediately followed by another wretchedly slow and boring piece called “Without You” which you’re better off doing without.

At last we make it to one of the better segments, “Casey at Bat”, which retells the famous poem about the great baseball player who, in his arrogance, strikes out while trying to show off at a big game. It’s very funny with a manic pace more akin to Looney Tunes. It’s one of the segments I mentioned that wound up being severed from the film and shown individually. “Casey at Bat” is sadly followed by another boring-as-all-heck segment called “Two Silhouettes” which features two rotoscoped silhouettes ballet-dancing as animated cherubs flutter around them. Dull as dishwater and certain to put any adult to sleep, let alone a rambunctious tyke.

Our patience is quickly rewarded with another of the better segments, “Peter and the Wolf”. Narrated by Sterling Holloway (Winnie the Pooh), it tells the tale of a little Russian boy who goes out into the wild with his animal buddies (each characterized by their own instrument) to hunt a killer wolf. What makes this story so unique is that each character is personified only by their individual instrument and not any voice acting of any kind. Clocking it at around fifteen minutes, it’s definitely very fun, upbeat and energetic.

We’re left to suffer through two more mediocre segments, the first of which is “After You’ve Gone”, a sleepy piece about anthropomorphic brass instruments and gloves which play a piano. The next yawn-worthy installment is “Johnny Fedora and Alice Bluebonnet”, which tells the tale of two anthropomorphic hats which fall in love but are separated when they’re purchased. I suppose it’s a little more lively than some of the other pieces, but still very slow and agonizing never-the-less.

The movie ends on a definite strong note with “The Whale who Wanted to Sing at the Met”, another of the three segments which reached popularity when shown on its own. This story is about a whale named Willie who can sing in three separate operatic tones and piques the interest of a talent agent named Tetti-Tatti. Tetti, however, believes Willie has swallowed an opera singer and means to harpoon the poor guy while he’s giving a performance. A very sad story but all the better for it, with a lot of roaring music and solidly pleasing animation.

There’s one more segment, “The Martins and the Coys”, which is a musical retelling of the famous hillbilly feud you may have heard about. For reasons I don’t fully understand, this segment was removed from “Make Mine Music” for the film’s DVD release. Supposedly, the geniuses at Disney thought the humorous gunplay in the segment might warp the minds of impressionable young children. Alternatively, some claim that Disney did not want to offend their Southern audience, as the film portrays Southerners as being triggerhappy hicks. Whatever the reason, I abhor censorship of this kind and sternly wag my finger at Disney for pulling something like this.

At any rate, the absence of one segment only means to make a very mediocre film worse. “Make Mine Music” is an often overlooked Disney flick for a reason. It is incredibly dull 70% of the time, with only three segments of actual worth. I definitely wouldn’t recommend this to anyone but the most dedicated of Disney fans.