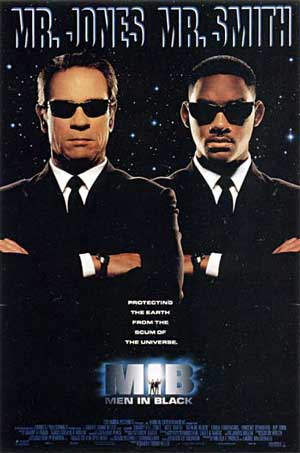 I was immediately drawn to this film when it came out in 1997; it was like Ghostbusters but with aliens. It sure as hell beat that year’s extraterrestrial alternative, Contact. Ugh. Men in Black, based on the Malibu comic book series, takes a concept you’d think would be rather simple, an organization that polices alien activity, and really works an intriguing story out of it.

The Men in Black are a top secret non-Government organization which monitors and polices alien activity on planet Earth. Agent K (Tommy Lee Jones) is a founding member, and after the retirement of his long-time partner, Agent D, is in the market for a replacement. He finds promise in a rough-around-the-edges NYPD detective (Will Smith) and hires him on. Now known as “Agent J”, the newbie must learn the ropes of his new life and employment…and he’s got to learn them fast. It would appear that an alien “bug” (Vincent D’Onofrio) has come to Earth in search of “the galaxy”. With it he can conquer his enemies as well as the planet.

What makes Men in Black so different is that it avoids the whole “Government” angle one would expect from a movie about alien cover-ups. The thought of an organization even more top-secret than the Government is refreshing and keeps the scope from being too limited or predictable. As the movie goes on they divulge bits and pieces of the “MIB’s” history, such as how they can fund their operations, how they first began policing aliens and how they manage to get away with what they do without anybody noticing. It adds a sense of “realism” to the works, in that if an alien-policing organization *did* exist it could conceivably function in this manner.

Men in Black is also a fun spin on the tired “buddy cop” genre. K is the stoic and by-the-books seasoned veteran, while J is the “I play by my own rules” loose cannon stereotype. Yet, they play off one another in a way that’s genuinely hilarious. The presence of sci-fi material and over-the-top gadgets like the “LTD” or the Noisy Cricket injects some fresh ideas into what would normally be a stale formula.

The special effects are both good and bad. The 1997-era CGI isn’t exactly astounding, though at the time, it was considered amazing. Thankfully, they blend the CGI with traditional effects like props and costumes, so things don’t feel quite so fake. Mikey, for instance, works pretty well, transitioning from a guy in a costume to a CGI beast rather smoothly. One thing they pull off which I absolutely love is the manner in which the aliens disguise themselves as humans. Some simply morph their bodies, while others wear a variety of costumes or even the skin of other human beings. Tiny aliens pilot full-sized human “mechs” while some go the “ghetto” route and wrap themselves in a blanket and simply stick a puppet-head out the top. It’s very clever and funny.

The chief villain, Edgar, is realized rather well. For the bulk of the film, he looks like a walking corpse with skin that doesn’t fit quite right (as is the intent) and Vincent D’Onofrio pulls it off extremely well. The final battle, where he morphs into the giant “bug”, is a bit too heavy on the primitive CGI, but makes for some really funny moments and a very solid ending.

Men in Black eventually spawned a totally kickass animated series (which *needs* a DVD release) as well as a mediocre sequel that you should probably avoid. I’ve never read the original comics, so I can’t tell you how accurate of an adaptation this film is, but on its own merits it is very fun and memorable.