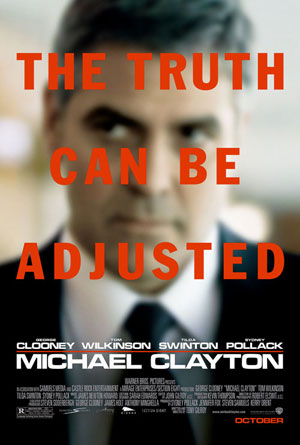 Would I recommend that you go see “Michael Clayton” in the theaters? Honestly, no. Do I think this is by any means a bad movie? Most certainly not. In fact, I thought it was fantastic. However, suspense thrillers of this nature, which take a while to gather steam and are visually very “simple”, can be enjoyed just as much at home as on the big screen. “Star Wars”, “Jurassic Park”, those are movies best experienced in the theater due to their excessive special effects. “Michael Clayton”, a movie which relies on its story and characters, doesn’t really need to be seen on a two story-tall silver screen. Never-the-less, I’d recommend anybody who happens to be a fan of these sorts of thrillers check it out whatever way is most convenient, as you’ll definitely enjoy it.

Michael Clayton (George Clooney) is a “fixer” for a major Manhattan law firm. He is called in to deal with a bizarre case once his close friend, Arthur (Tom Wilkinson), apparently goes nuts after spending years defending his company’s supposedly lethal pesticide. This means a lot to Michael, because if he can’t rein Arthur in then his entire career is in jeopardy. However, the further Michael digs into Arthur’s sudden psychotic grudge against the very company he was employed at, the more he begins to question how “crazy” Arthur really is. This puts both Michael and Arthur at risk, as the company will go to deadly lengths to keep certain information from ruining them.

When the film began, I wasn’t entirely sure what the plot was going to be. Nearly an hour into “Michael Clayton”, I still wasn’t positive where everything was going. However, as the film progressed, the plot began to defragment itself, making everything from the first hour which seemed entirely pointless reveal its true value. “Michael Clayton” is the sort of movie which requires your absolute attention. If you devote anything less, you’ll be scratching your head through the entire run. It also requires a good deal of patience, as the plot develops very slowly and steadily with several threads running at the same time. As I sat there in the theater, I kept thinking to myself “this is the kind of movie my grandparents would like”. By the time the credits were rolling, I felt twenty years more mature.

Being very story and character driven, “Michael Clayton” is left to rely greatly on its cast. George Clooney contributes an excellent performance as the title character, though it’s not one I think most people would single out as being stellar. Michael Clayton is supposed to be very stoic and sullen considering everything going on in his life and Clooney nails that without question. However, given the rather low key nature of the character, it doesn’t immediately pop out to you as a magnificent performance. Tom Wilkinson’s Arthur is either funny or intriguing, depending on the audience you’re with. The scene where Arthur loses his mind at a meeting as well as his various lunatic ravings drew some laughter from the audience which I don’t always think was the intention. Still, it’s a very lively performance and not once did I ever roll my eyes or drop out of the experience.

“Michael Clayton” is what I guess you could call an “old fashioned” kind of movie and one that’s only going to appeal to those who can maintain their attention span for more than an hour (there were some teenagers a few rows behind me who got bored seventy minutes in and began making giggling cell phone calls). Still, if you enjoyed flicks such as “Breach” or “Fracture” then there’s no doubt you’ll get a kick out of this. It has an especially satisfying conclusion, too.