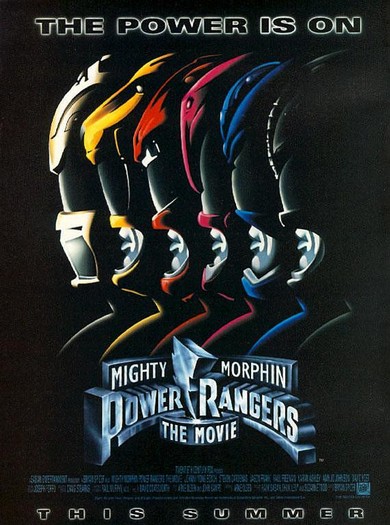 Go ahead and laugh at me. I don’t care. When Power Rangers first premiered I was the exact age the show was targeting, and I ate it up with a spoon and a Dragon Zord. Granted, my love of Power Rangers was one of my flakier phases considering I out-grew it by season 3, but I still carry with me a certain appreciation for those original episodes that sent me into a frenzy of sugar-induced spasms every Saturday morning.

At the tail end of my dedication to Power Rangers came “Mighty Morphin Power Rangers: the Movie”. I remember wanting to see it in theaters rather badly, but my friends were all trying to outdo one another in the “maturity contest”, so admitting to wanting to see something as childish as Power Rangers would have meant an instant disqualification. Nevertheless, I urged my Mom to rent it for me and I watched it in secret. And ya know what? It’s honestly a really fun kid’s movie.

Evil outer space tyrants Rita Repulsa (Julia Cortez) and Lord Zedd (Mark Ginther) are sick and tired of losing to those pesky Power Rangers. Determined to defeat those teenagers with attitude, they release the gruesome conquer Ivan Ooze (Paul Freeman) from his prison. Ooze coordinates a series of events that leaves the Power Rangers’ Commander, Zordon (Nicholas Bell), on the brink of death while simultaneously robbing the Rangers of their ability to Morph. With no alternative, Tommy the White Ranger (Jason David Frank) leads his team to the planet Phaedos in order to locate the power of Ninjetti which will give the Rangers new Morphing abilities and sweet new Ninja Zords. But they’d better move fast, as Ooze has already brainwashed all the adults of Angel Grove into freeing his giant insect robots from their underground tomb and intends to lay waste to the entire planet.

Yeah, I know. It’s all very silly and crazy and over-the-top…but that’s what Power Rangers is. It’s a live action cartoon at its core, aimed at kids, and if you can’t have a sense of humor about it then you’re never going to like it. While the television series at the time may have suffered from some very “cost-efficient” set pieces and costumes, “Power Rangers the Movie” has a very admirable budget and much grander scope than that era’s incarnation of the TV show. Hardly a prop from the TV series is reused for the movie, with the Rangers getting new and more detailed outfits (at last, the Pink Ranger loses that stupid miniskirt) and all the familiar monsters and villains receive brand new costumes. Even the city of Angel Grove, which in the TV series seemed to be nothing more than a juice bar and a collection of deserts and open fields, is now a bustling metropolis with people on the streets running for their lives as giant robots duke it out around them.

Aside from the grander production values, I think what I dug most about the movie were the fight scenes. Director Bryan Spicer seemed to know that the target audience for this movie were ADD-suffering ten year olds, so the fights are fast, furious and surprisingly well-coordinated. This movie has some downright crazy wirework and a whole lot of it. When a villain goes down they don’t just fall over, they spin fifty times in the air, smack into a steel girder, spin some more and then crash into the ground. And as much as people make fun of the actors who play the Power Rangers, one can’t deny that they are really talented martial artists or gymnasts. A special shout out should go to Johnny Yong Bosch who played Adam the Black Ranger and performed all of his own stunts. And considering how crazy some of the stunts in this movie are, that’s rather impressive.

But the movie isn’t all sundaes and lollipops. There are a few things I didn’t dig about it. By this point in the TV series, half the original cast had left and their departure was one of the main factors in my losing interest in the series. Of course, now-a-days Power Rangers has a new cast every season, but it wasn’t like that when the show started and I certainly wasn’t used to it. There was honestly nothing wrong with any of the “new” Power Rangers, but I think I would have enjoyed the film more if the original cast had been there for each role.

While I applaud the new updated and better-looking costumes for all the characters, there were a few I didn’t really dig. I think my main complaint would be Goldar, Rita’s griffen-like henchman, who wound-up with a less detailed and less fearsome costume than the one used in the TV series. They also dumped all of Rita and Zedd’s other henchman, Squat, Baboo and Finster, and replaced them with a single new one, a pig-guy named Mordant. I would have preferred to have seen the henchmen I liked with updated costumes instead of some new goon. The Ninja Zords are also realized in some rather primitive (but amazing at the time) CGI instead of the traditional man-in-suit effects. I admit that back in the day when CGI of that kind was a new and wonderous sight, I thought they were awesome. But hindsight is 20/20 and they do look rather poor by today’s standards. At the very least, the traditional man-in-suit Zords couldn’t have looked any worse.

“Power Rangers the Movie” is a kid’s flick at its core, so I’m not out to convince any adults in the audience to run out and rent it. Chances are a lot of you already hate the franchise. But just because it’s a kid’s movie doesn’t mean it isn’t fun, and fun is something Power Rangers has always had in abundance. I mean really, this movie is only slightly goofier than “Krull” and you know it.

At any rate, if you do decide to check it out you may very well enjoy some of the suit designs and well-choreographed action sequences. And with Power Rangers still being a juggernaut of children’s entertainment well over ten years later, those of you with kids are probably going to be forced to watch it at some point, anyway. So try and enjoy it.