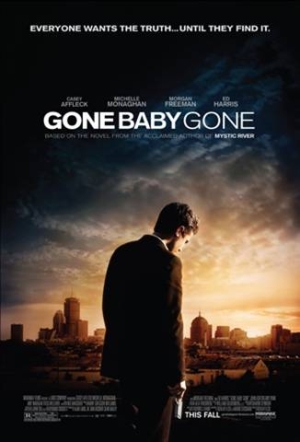 Ben Affleck was at the top of the world a few years ago. He was getting all of the juiciest scripts, he was dating the most desired celebrity, and he was dubbed as one of the sexiest people alive. He could do no wrong. But it all went out of control. Bad career decisions resulted in a string of flops. His very public relationship fizzled. And he found himself the butt of jokes. But the guy did a complete 180. he found a new love, peace of mind by retreating from a high profile lifestyle. And he finally made a movie that is a worthy follow-up to his academy award winning screenplay for Good Will Hunting.

Gone Baby Gone could be seen as a new chapter in Affleck’s life. Finally, here is a movie that has an intense strength and that regales in its integrity. Funnily enough this is the one movie where he is not in front of the camera, but behind it. Affleck’s whodunit shows that he has a lot of promise as a director. This is a movie of contrasts. The topic is so sensitive and at times shocking but Affleck decides to pull back and let the camera turn into a mute, non-judgemental witness. For a debut film, Affleck does know his way with the camera. His almost verite like camera movements allow the camera to serve as conduit for the story. You, as a viewer, are then forced to absorb the story and make your own moral judgment.

Casey Affleck is effective as the main character, detective Patrick Kenzie, who was asked to help in investigating the disappearance of a little girl. Just like the movie, there is quiet intensity to his portrayal. In fact, all of the actors in the movie turned in stellar performances. Affleck, being an actor, may have a lot to do with this success. He was able to convey what he wanted through his actors. Ed Harris, Morgan Freeman and Amy Madigan deserve special mention as they were all triumphant in their roles, with Ed Harris stealing the show as the morally ambiguous detective Remy Bressant.

The cinematography of Gone Baby Gone is understated and muted. The languid camera movements almost lovingly soak up the scenery (this is after all, partly a “love letter” to Kenzie’s neighborhood). The setting appropriately turns fast and macabre especially in the brief part with the child molesters. This is a strong counterpoint to the whole look and feel of the movie, which is intense in a way that it forces you to just listen to the characters and the nuances in their relationships.

Gone Baby Gone is proof that Ben Affleck still has a lot to offer Hollywood and the movie going audience. I look forward to his other films.