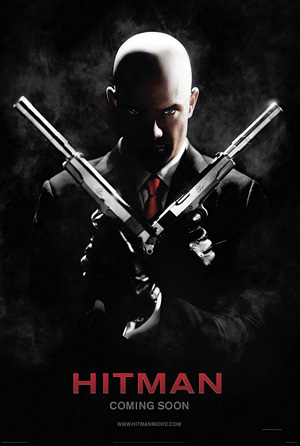 just like any other guy, i also like watching action movies. i don’t know about the others but i find it a good release for some of my pent up agression. imagining the bad guys as that annoying little ass kisser at work or that moron in front of me at the atm machine somehow gets me through the day without really needing to unleash it on the actual subjects of my irritation or on someone else.

Hitman is one of those movies that is just perfect for my purposes. it has unrelenting action. it is unapologetic about the level of violence and some of the action set pieces are quite cool– okay, near cool. unfortunately, for me an action movie still needs to make sense and pass my critical eye and that is what this movie failed to do.

I have to admit that I had fairly high hopes for this movie. For one thing Luc Besson himself is attached to the movie as a producer. Everyone knows of Besson as the director who helmed such hitman classics as La Femme Nikita and Leon: The Professional. Another reason, I had high hopes is because of Timothy Olyphant, whom I consider as one of the most underrated actors in Hollywood today. He plays the titular Agent 47.

Unfortunately, even though Olyphant did show some of his acting skillz it was not enough. I think he knew that the movie is going to be crappy even with Besson involved that at some point he just phoned it in. Besson’s mark can actually be seen here and there most especially in the gorgeous shots in the hotel hallway and the kinetic fight inside the bus, that evokes some of the best action sequences in Leon and in The Transporter (which also had its own bus fight scene). But other than that, his influence has been subjugated by director Xavier Gens’ penchant for intercutting fight scenes, which leaves much to be desired. It does look kinetic but the flow also stutters like a kid with a speech impediment.

One shining light in the movie is Dougray Scott, who played the role of Interpol agent Mike Whittier. Scott successfully fleshed out his character with the little screen time and acting opportunities that was given to him in the movie. His character, which is driven to bring to justice the hitman, was competently acted. Scott managed to avoid turning his character into a caricature.

On the other hand, talking strictly as a man and not as a movie reviewer, I have to say that Olga Kurylenko smoldered on screen. She’s got the body that can give a rise to anyone. Stupid Agent 47 for not eating from the delicious platter that was willingly being served to him. Now, as a reviewer, Kurylenko’s character is one of the main reasons why this movie did not work. After painstakingly establishing that Agent 47 is a highly trained killing machine with no conscience and pity he suddenly falls for Kurylenko’s character just because she has a tattoo on her face? Stupid.

Overall, Hitman is only a movie that will be enjoyed by people who only look for action sequences without considering the story, or people who love to look at gorgeous breasts.