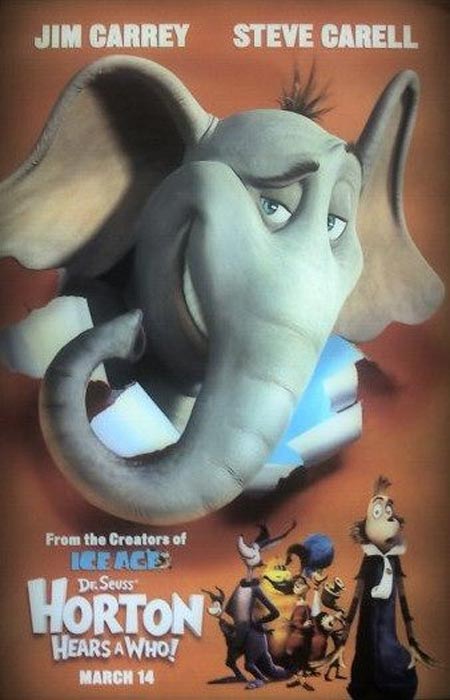 Dr. Seuss has held off on having his works put to film. It took years and years of courting from Hollywood until his widow finally relented and gave us the first Dr. Seuss movie – How The Grinch Stole Christmas.

It’s been years since that first movie and we’ve actually only seen a couple of adaptations. There’s the Grinch (which was slightly okay), and The Cat in The Hat (which was not okay). The third Seuss adaptation, and the first Seuss related material since 2003’s Cat… sees Jim Carrey returning again to what could probably be the best Seuss movie to date.

Horton Hears a Who is a funny and endearing film that successfully translates the whimsy, comedy and good naturedness of Dr. Seuss beloved works.

Carrey plays Horton, a fun-loving elephant who accidentally discovers a miniscule world that resides in a dandelion populated by Whos. The Mayor of Who-ville is played by Steve Carrell.

I think what makes this movie work compared to the other Seuss movies is the fact that this is the first one that went the animation route. It is ironic that computer generated characters were more successful in life to the book. The way the book was translated into film was a big success, the illustrations served as a great jump off point for the characters and you see that the distinctive Seuss style was not abandoned entirely. In fact, it was more enhanced without veering too far away from the established looks that children have grown accustomed.

Jim Carrey decided to bring a more understated performance to the movie this time around. In fact, it was so staid that I kind of miss the chaotic energy that he usually brings to his comedies. Steve Carrell, on the other hand, seems to have been bitten by the Carrey bug. He is over the top here and just plain whacko. He obviously had a lot of fun voicing the mayor. In fact, he serves as the real focus for this movie. And Who-ville was the perfect backdrop in which he could play with his character and show how much of a talented comedian he is.

Carol Burnett was a great foil as the main villain this movie. She brought just the right amount of menace without being over the top and too scary. She intrinsically knew that kids are going to watch this movie. Slightly more disturbing was Vlad, the creepy vulture voiced by Will Arnett. He was a scary sight but his delivery and his moments on screen were pure comedy. It was actually quite surprising that Vlad was even declared by my son as his most favorite character in the movie. As a parent, the monkeys were far more creepy for me. There was just something strange and a little bit scary with how they looked while giving that creepy smile.

Horton Hears a Who is a great tale about tolerance and the movie showed that even with Hollywood’s penchant to look at movies as products, here is one movie that never lost sight of its goal of being a good children’s movie.